Background on the Rainbow Chart model

The Bitcoin Rainbow Price Chart is based on a proposal presented in 2014 from a user named Trolololo in the Bitcoin forum, Bitcointalk.

Trolololo introduced a logarithmic curve whose equation is as follows: 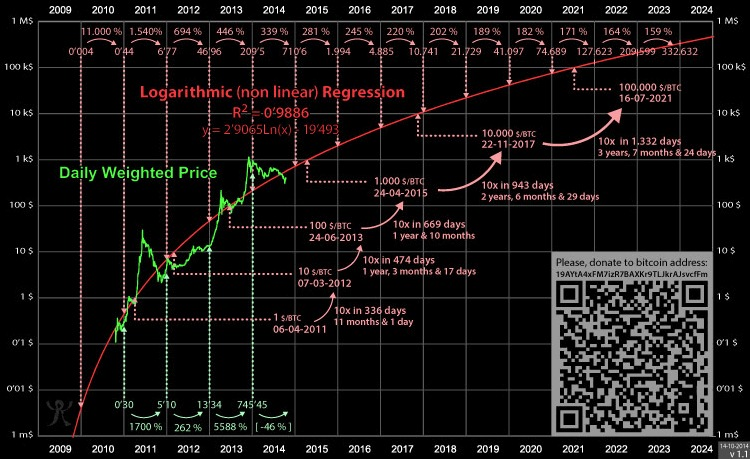 After gaining a small buzz on Bitcointalk after posting the chart, Trolololo explained, "This logarithmic regression is way better than the linear regression. But it's just a model, not a crystal ball".

Users found the chart to be insightful into finding the tops of the bubbles and the bottoms of the bubbles, essentially modeling an estimation of the roofs and floors of next bubbles.

Azop used a logarithmic price scale for Bitcoin and overlayed it with colorful bands to try to find correlations. The full "Bitcoin Rainbow Chart" model was completed later in 2018 by Über Holger by borrowing the colorful bands of Azop and applying them to Trolololo's logarithmic regression.

How to read the Rainbow Chart

The Rainbow Chart is meant to be a fun way of looking at long term price movements, disregarding the "noise" of daily volatility.

It's important to note that the chart has no scientific basis and like with most models, will be correct until one day it isn’t anymore..

There are 8 bands that overlay the bitcoin log price chart.

Each band depicts a price range aptly named to convene the current market conditions. Bands like “Extremely Overvalued” and "Extremely Undervalued" are historically good indicators of what's to come in the future.

The warmer colors are related to the zones for selling BTC and taking profits, while the cooler colors represent the zones for buying BTC, when the market is depressed.

The behavior between each of these 4-year Bitcoin cycles have shown traders potential buying and selling opportunities, which have sometimes been successful in predicting blow-off tops.

Over the years it has been found that most of the time, the Bitcoin price trend has remained within the bands of the Bitcoin Rainbow Chart, except on certain occasions, such as in the “bubbles” of 2011, 2014, and 2017.