Background on the Stock to Flow model

A decade ago, Bitcoin was created with the initial intention of becoming an electronic cash system, thus putting it in the currency bracket.

Today it has evolved to the point where bitcoin resists any attempts at clear categorization.

Economists and traders struggle to fit bitcoin into neat buckets and old mental models. Nevertheless, a growing consensus seems to view bitcoin as part of the 'commodities' family, alongside similar assets such as gold.

When we categorize bitcoin as a commodity, we're essentially defining it as a scarce, valuable, durable, divisible, tradable and transportable digital good. It also opens up bitcoin to valuation models that are relevant to commodities.

As with many fascinating bitcoin insights, the Stock-to-Flow model comes from a pseudonymous influencer known as Plan B.

How does Stock to Flow work?

Building on earlier work from Saifedean Ammous, Plan B splits the entire supply of bitcoin into two categories.

Bitcoin’s stock refers to the supply of bitcoin already mined into existence. BTC as of now

Bitcoin’s flow is the annual production of a commodity, which in bitcoin’s case refers to the number of new bitcoin’s mined each year.

The scarcer a commodity is, and hence the more valuable, the higher it’s stock to flow ratio.

According to Plan B’s data, gold has a stock-to-flow ratio of 65, which means it would take 65 years to produce the current stock of gold at today’s rate.

Gold's S2F: 185,000 tons of gold circulating in the world, and 3,000 tons are produced every year, the S2F for gold can be calculated by dividing supply by flow to get a figure of roughly 65. 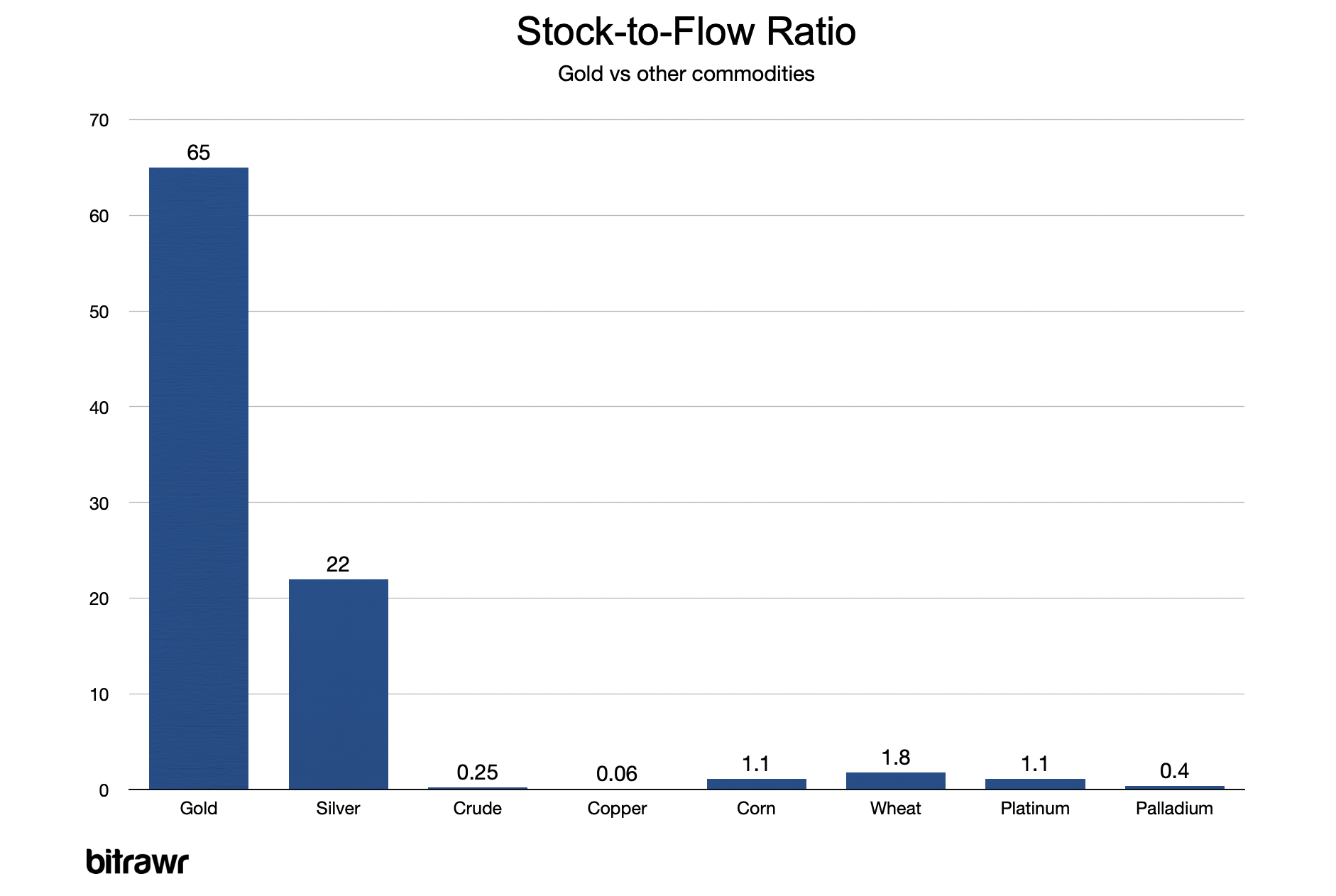 Gold’s Stock-to-flow ratio at 65 vs. other commodities

Silver has a S2F ratio of 22. Meanwhile, commodities like zinc, copper and palladium generally have a S2F ratio closer to one. This makes them fairly replaceable and abundant.

And what about Bitcoin? Well lets calculate that now.

Calculating the Stock to Flow ratio

Calculating S2F is simply taking the current amount of BTC in existence and dividing it by the amount of BTC being created in a certain time period.

When it comes to the flow of bitcoin, it’s important to remember that the bitcoin halving in May 2020 cut down the issuance of new bitcoin by half, making an already scarce commodity that much harder to come by.

However, by the time bitcoin production will get cut in half once again in 2024, it’s S2F ratio will be as high as 103! 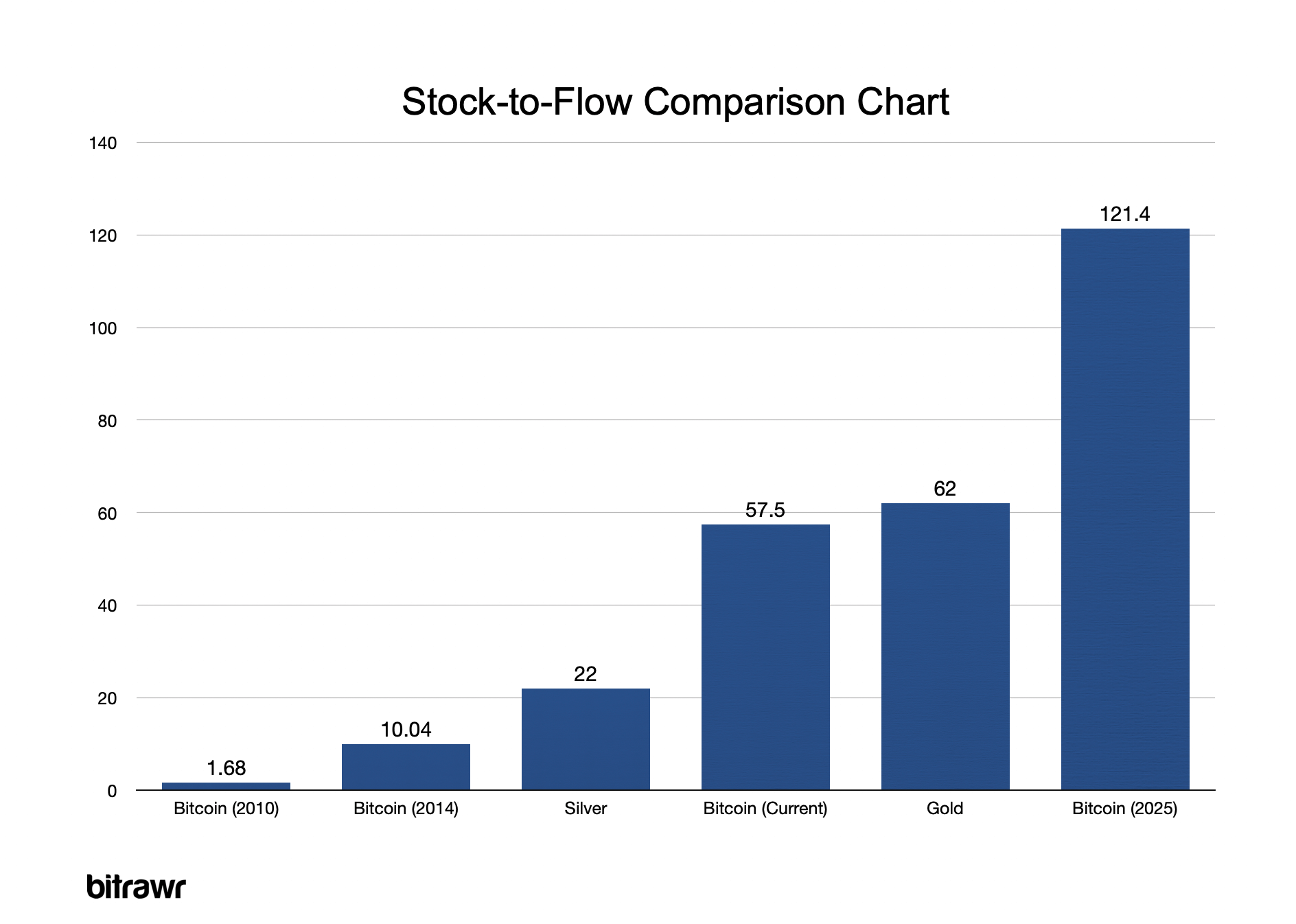 Stock-to-flow comparison chart with Bitcoin and other commodities

The S2F model is one example of using regression analysis to formulate theories about the price of bitcoin. Regression analysis looks at the relationship between a certain variable (the S2F ratio in this case), and the bitcoin price.

If that relationship is found to be statistically significant, analysts can extrapolate into the future based on the results that happened in the past.

While it is well-known that when it comes to investments, ‘past performance is not necessarily indicative of future results’, models such as S2F and the similar ‘Rainbow model’ can help us frame bitcoin’s price movement and map out relevant variables that influence its price.

Most of these analyses have one important thing in common. They predict significant price increases following a Bitcoin halving every four years.

Intuitively, it’s understandable that an asset’s price will show upwards price pressure once the supply decreases.

Less supply, even if demand doesn’t increase, means higher price. Satoshi knew basic economics, and arranged the rules of the game to leverage this simple dynamic.

By programming supply halvings every four years, he set the foundation upon which the adoption of Bitcoin could play out.

Why does this chart use 463 day cycles?

It was the rational of Preston Pysh in 2020 that S2F should be viewed in 463 day cycles.