Why is this Bitcoin cycle fundamentally different

The recent rise of GameStop shares and the ongoing battle with Wall Street represents a much deeper ideological battle. People are beginning to seek a way to exit the system. 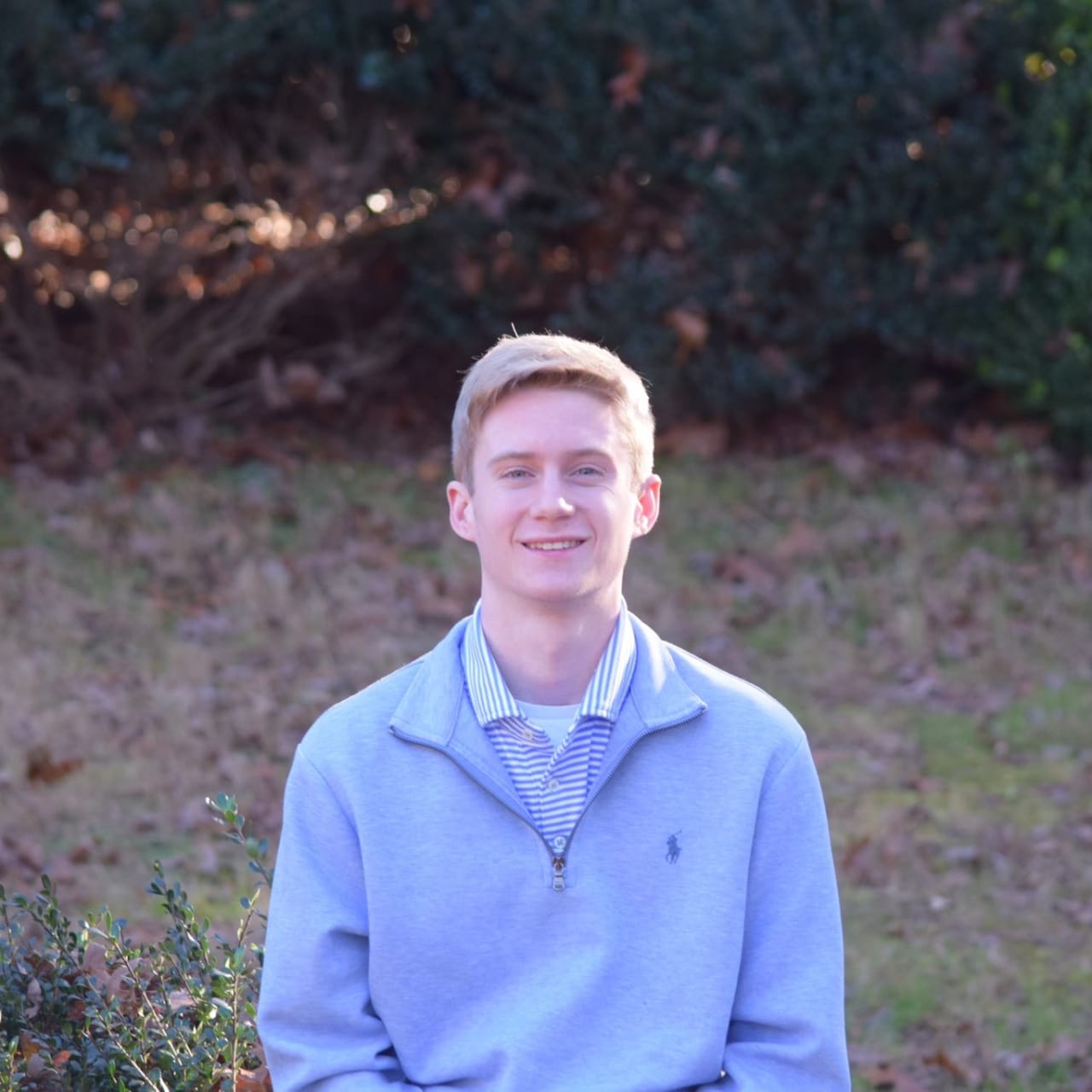 After a massive price rally from $3,000 to over $40,000, many are wondering one simple question. Who on Earth is still buying Bitcoin after such a massive run?

Due to the transparency of Bitcoin being an open-source protocol, on-chain data can be viewed and analyzed to help answer this question. The first section of this article will preface this by describing previous price rallies, and the fundamental adoption(or lack-there-of) behind them.

The second section will look at on-chain data from 2020 - 2021 to understand the fundamental adoption that has driven this current rally, what makes it different than the previous rallies, and why it has likely just begun.

Bitcoin adoption in its infancy

Shortly after Bitcoin’s conception in 2009, it was mostly cypherpunks and hardcore Austrian economists that were accumulating. During the early days, Bitcoin did not even have a monetary value attached to it, and it cost more to mine coins than they actually were worth.

However, this core belief group made up of cypherpunks and Austrian economists understood the importance of Bitcoin, and how it could have the potential to shape the future.

It is this core group of believers that sacrificed their time and energy to push Bitcoin ideology forward amidst massive criticism. The first price attached to Bitcoin was determined by the New Liberty Standard exchange to be $0.0008, being valued based on the electricity needed to mine each coin.

Soon after, the first major price run up occurred leading up to July 2010, when one coin increased by 100x in value to become $0.08. It was around this time that the infamous pizza transaction occurred when a man named Laszlo Hanyecz paid roughly 10,000 coins in exchange for two pizzas (now worth over ~$300M).

Through mid-2011 it rallied past $10.00 and got its first major wave of retail interest although it was still mostly considered a novelty at that time.

From 2011-2013 it was mostly known for being used on the infamous Silk Road dark website due to its anonymity. This makes perfect sense in terms of adoption because the first group of people that are often willing to make use of new technology are those who are involved in riskier activities, allowing them to be innovative and one step ahead.

On November 28th, 2012 the first Bitcoin halving took place, cutting the block reward down from 50 coins per block to 25. The following year, 2013, was the largest year for Bitcoin in terms of price appreciation, drawing massive retail interest and even a few mentions on major networks like CNBC. 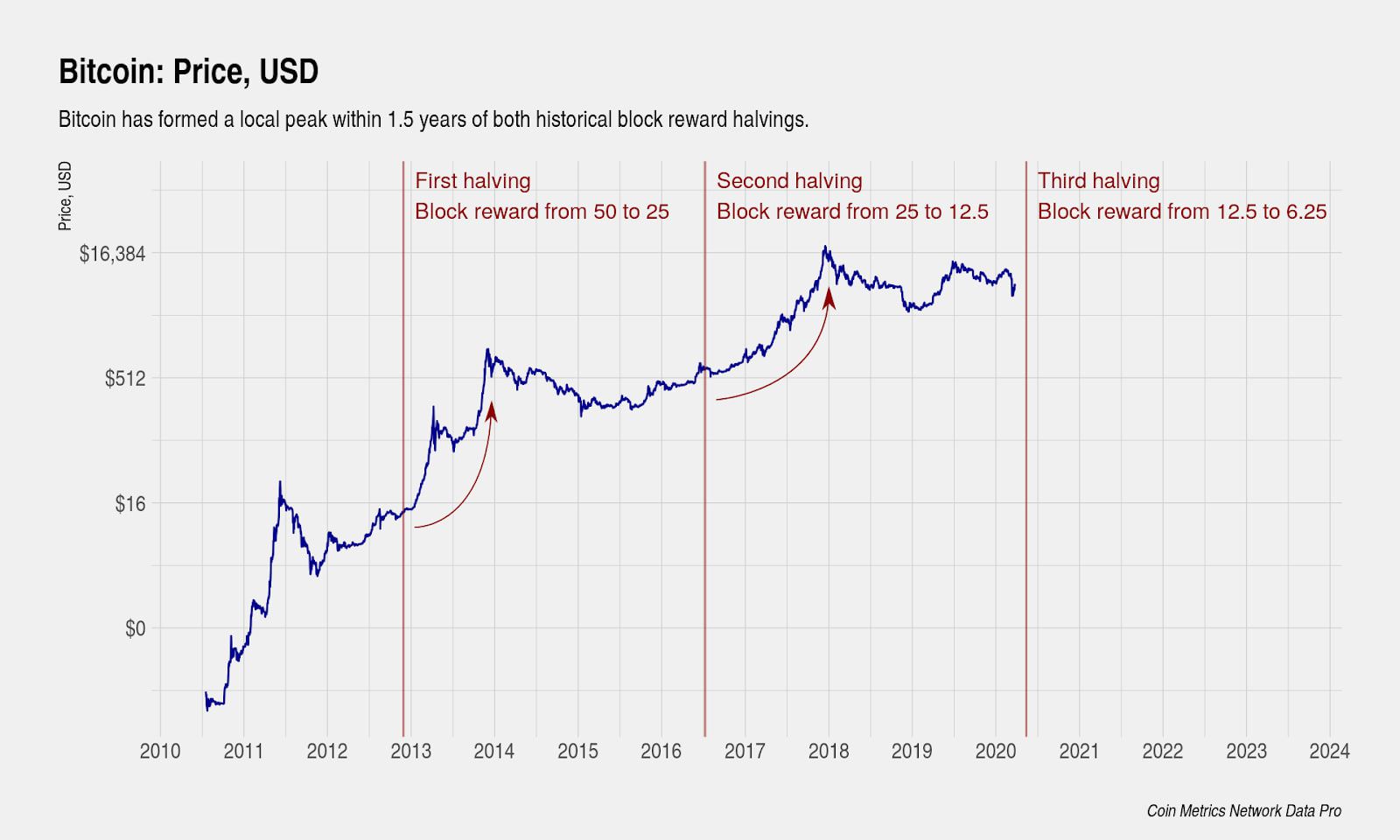 Then, on July 9th, 2016 the second halving took place, cutting the block reward from 25 coins per block to 12.5. This supply shortage caused another price rally in the following year, 2017. During this time Bitcoin was mostly traded by retail investors, who held onto their coins for short periods of time, not leaving exchanges.

This can be illustrated by the chart below, created by TheBlock, showing a steady increase of exchange volume congruent with the price rally.

Most of the retail investors participating in the 2017 rally did not even understand what Bitcoin was aside from the fact that the price was appreciating.

2017 was also the year of the ICO craze, including thousands of new “crypto” coins claiming to be the next BTC. Bitcoin’s market share dominance reached an all-time low during this period.

Bitcoin’s % dominance of the crypto market measured by market capitalization

There were many disputes at the time about what Bitcoin’s utility was at this time, the most famous of which was the Bitcoin Cash fork of the original protocol. The founders of Bitcoin Cash believed Bitcoin was valuable for transactional purposes rather than as a store of value. After the frenzy died down in early 2018, Bitcoin Cash along with all the thousands of other ICO coins would collapse to nearly zero against Bitcoin.

In the end, the market determined that the decentralization and fixed supply of Bitcoin differentiated it from all other coins, particularly its role as a store of value rather than transactional medium. Its dominance has never been questioned since. Following the 2017 price rally Bitcoin lost roughly 80% of its dollar denominated value, falling to $3,000. Skeptics once again claimed Bitcoin to be dead.

In March of 2020 the Coronavirus pandemic hit, causing a massive shortage of dollars, followed by record amounts of liquidity being pumped into the monetary supply.

At this time, many new investors came to the horrifying realization that the spending power of any cash they held was a melting ice cube. This, in combination with the third halving that took place in May 2020 (cutting the block reward from 12.5 to 6.25), brought massive interest to Bitcoin as an inflation hedge asset.

The most notable of which being Microstrategy CEO Michael Saylor, making news by allocating $425,000,000 of Microstrategy's treasury to Bitcoin.

In addition, Saylor would later issue convertible debt notes to buy Bitcoin. Essentially what he did was lever a failing currency against an emerging one, a genius move in my eyes.

It seems that Saylor wasn’t the only one thinking this way, as Bitcoin exchanges began to begin record outflows of supply (with the exception of the spike during the March liquidity event), thus making there fewer coins available to buy. 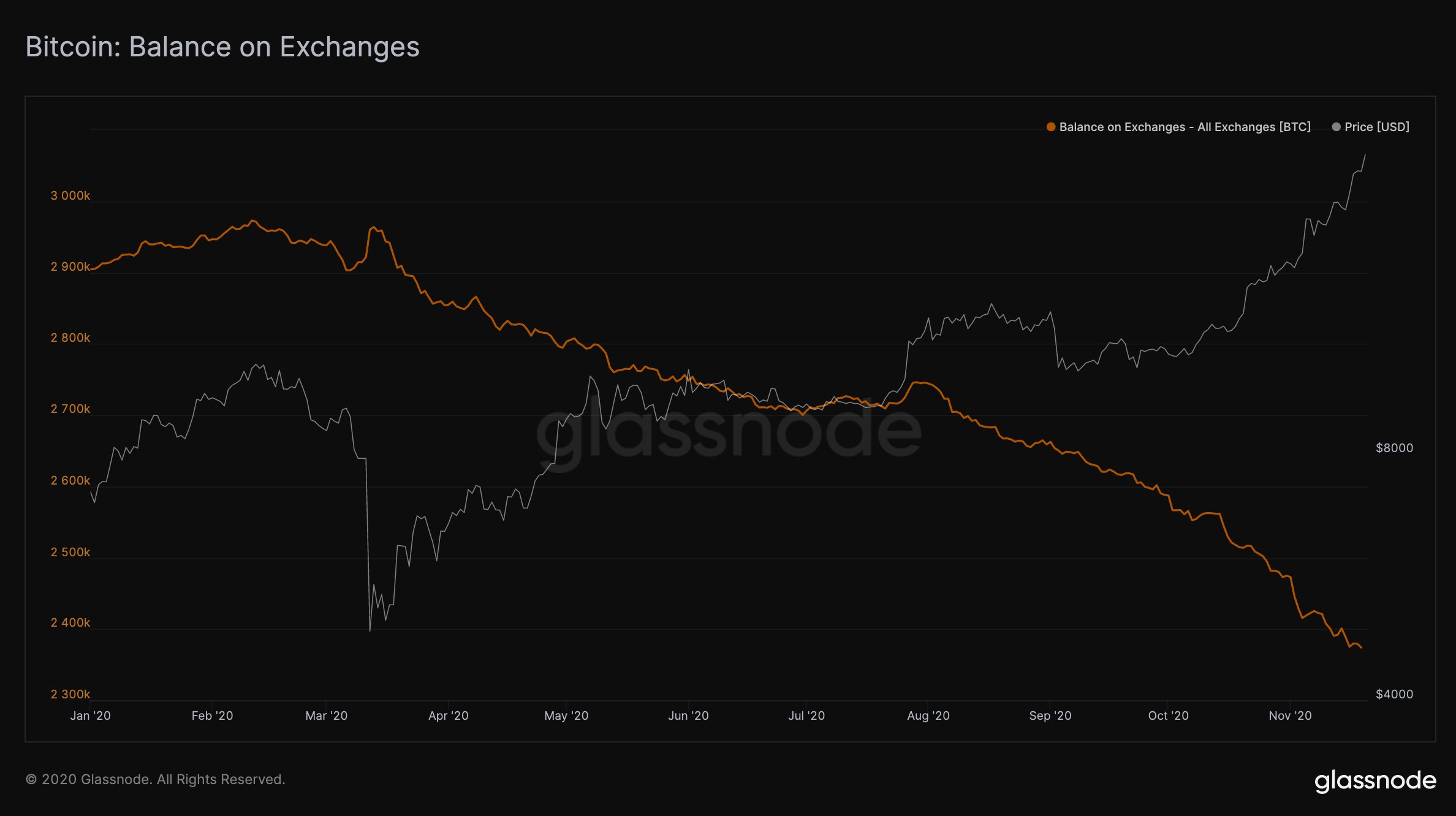 Steady outflow of coins from exchanges since March. Illustrated by gold line

Throughout the year, the price continued to do what it had in the past post halving event, appreciating rapidly. In the background, there was ever more liquidity being pumped into the system.

Leading up to the end of the year, more big names took Bitcoin positions. The most notable being Guggenheim, Mass Mutual, Square, and even BlackRock giving the green light for allocation.

In addition we’ve seen notable names in the financial world such as Bill Miller, Paul Tudor Jones, and Stanley Druckenmiller. So not only have we begun to see institutions take Bitcoin positions, but high net worth individuals as well.

This can be illustrated by looking at a chart from Glassnode showing a massive increase of Bitcoin wallets holding over 1,000 coins. (over ~$30,000,000 at today’s prices) 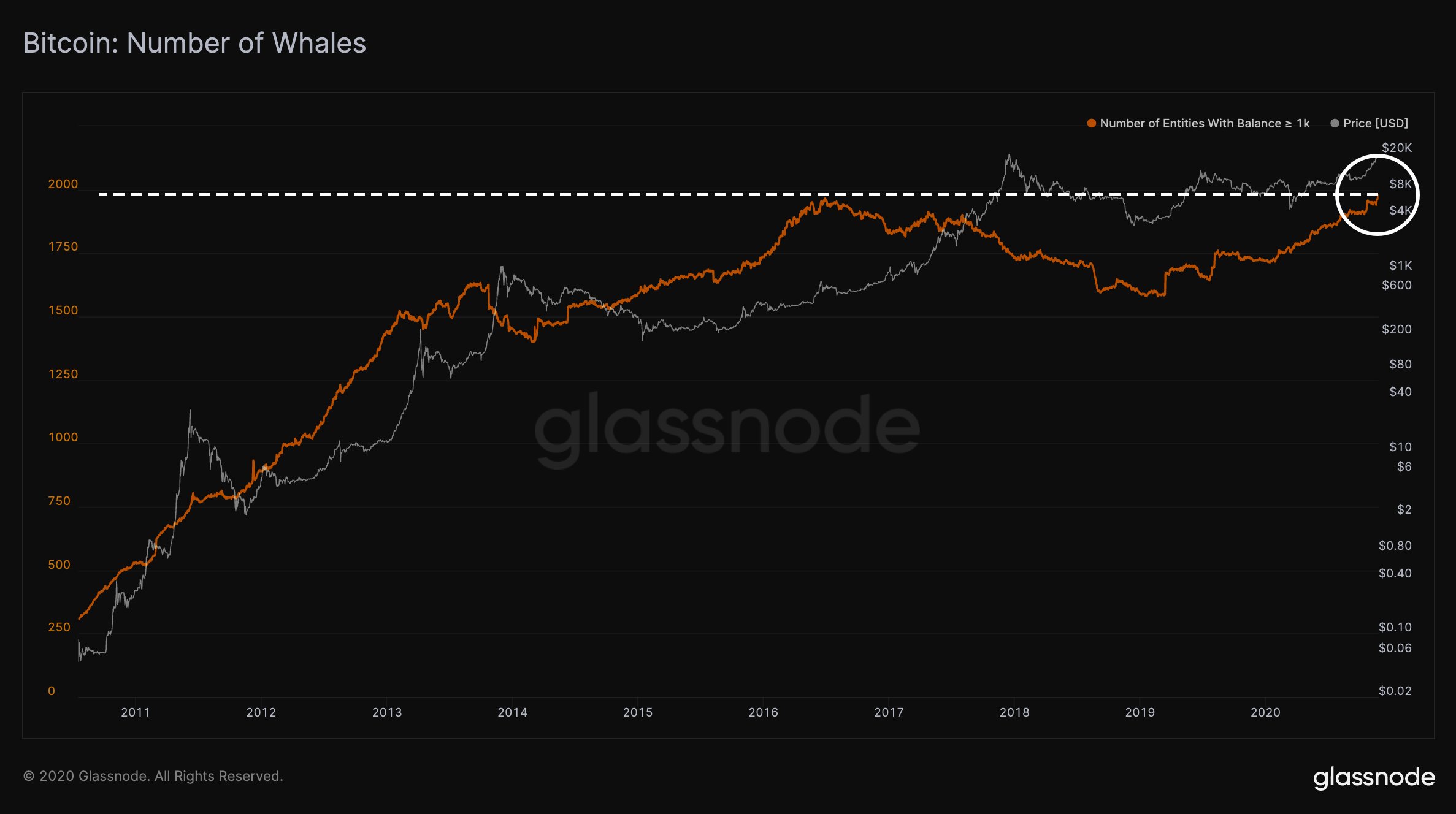 Steady increase in Bitcoin whale wallet addresses, particularly the massive spike at the end of 2020

Another entity that should be noted is Grayscale Bitcoin Trust, who is important because they provide an on-ramp to investors not familiar with the technicality of Bitcoin and would rather trust another credible institution to control their private keys/storage.

Grayscale now controls over a whopping 3% of all Bitcoin supply for their clients and has been steadily buying up supply throughout the year. At the time of writing GBTC currently buys more coins every business day than are mined (900 BTC).

This can be illustrated with the chart below, showing increasing inflows to their trust.

Flows into Grayscale’s holdings increased massively throughout the year, including a record spike in January 2021 - The Block

So what does this all mean for you?

Supply is drying up fast, and is going into strong hands that are not looking for short term gains. Any company taking a position on their balance sheet is not looking to trade Bitcoin, they are looking to hold it for 10-20 years minimum.

This cycle is fundamentally different because coins are not only being bought, but moved off of exchanges into cold storage. This massive decrease in available of supply on exchanges has never occurred before in Bitcoin’s history, especially during a post halving price rally, which is already driven by the rate of new mined supply being cut in half.

We have taken a look at the on-chain data, but there’s another main reason this cycle is fundamentally different.

Since the March liquidity event, the Fed was forced to print over 30% of all money in existence and has already announced another 1.9 Trillion-dollar stimulus bill coming in the next few weeks that is greater than all the spending in 2020 combined. If the Fed intends to keep the system afloat, this is likely just the beginning of what’s to come. 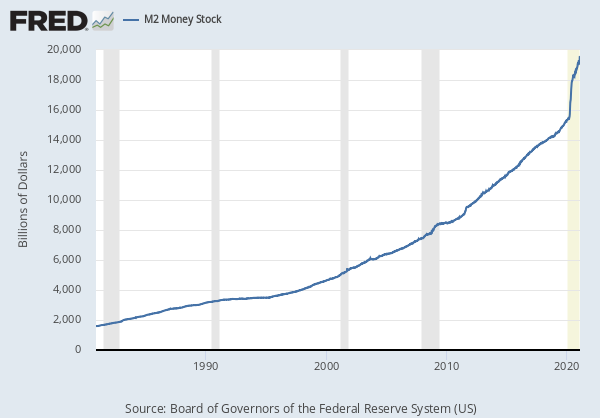 This increase of money supply inflates the price of assets, thus widening the wealth gap.

People are beginning to seek a way to exit the system and there is a fundamental loss of trust starting to occur.

The recent rise of Gamestop and AMC share represents a much deeper ideological battle. Market participants are beginning to question the system and why it does not benefit them.

This fundamental loss of trust in the traditional financial system and exponential increase in monetary supply, along with the programmatic supply function that is coincidentally taking place in the backdrop, makes for a more bullish case for this Bitcoin cycle than any before.

This is the thought process of many whales accumulating, getting off 0% exposure in case Bitcoin takes off.

With that said, I would like to leave you with this quote by Bitcoin’s creator, Satoshi Nakamoto:

“It might make sense just to get some in case it catches on. If enough people think the same way, that becomes a self-fulfilling prophecy.”