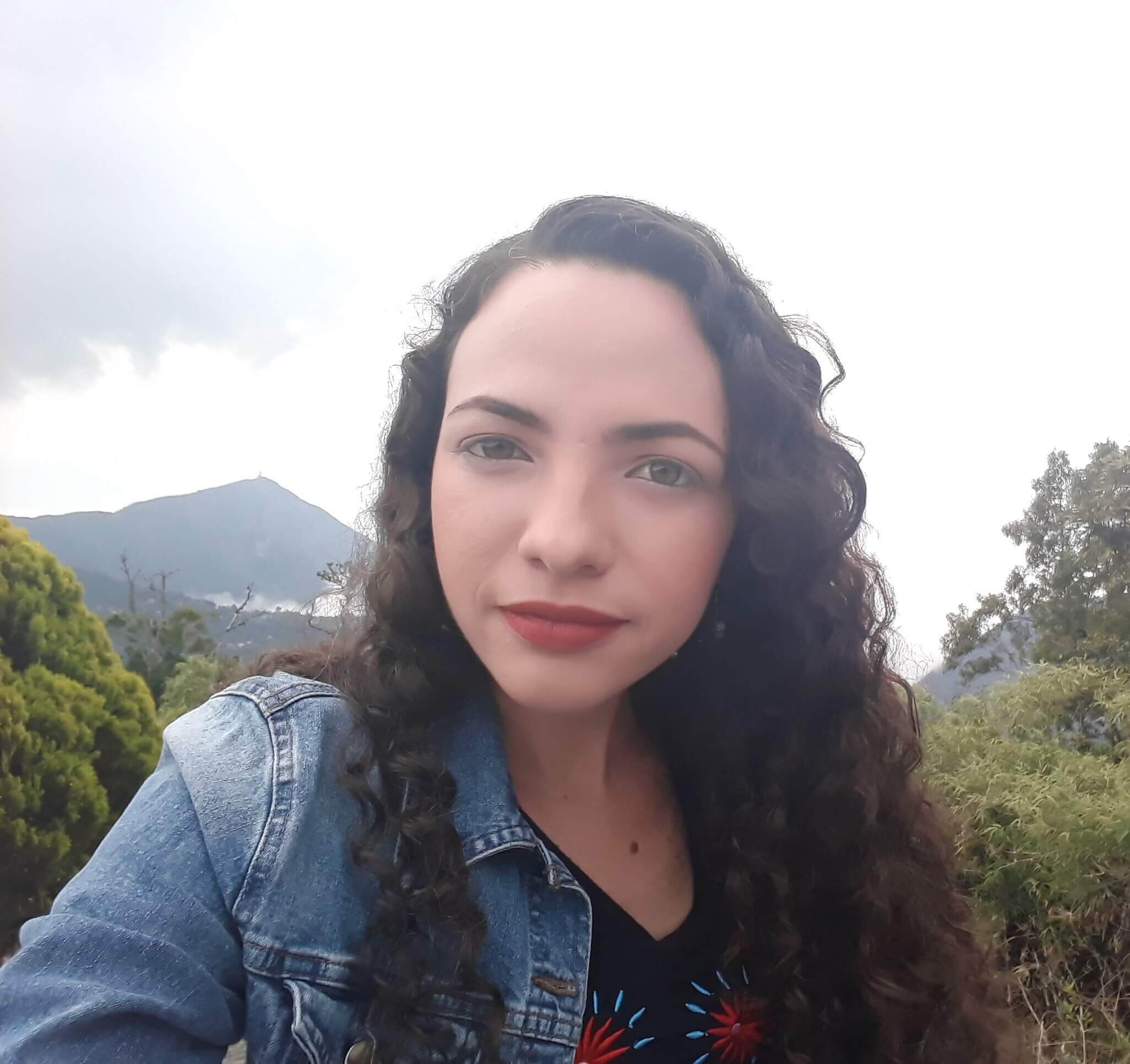 With the Lightning Network, bitcoins transact at nearly the speed of light, one million times more energy efficiently than Visa, and open to all 7.6 billion people on this planet — no ID or bank required.

The textbook definition for scalability is “the ability of a business or system to grow larger”.

When talking about the scalability of Bitcoin, reference is made to the ability of the Bitcoin Network to rapidly process large volumes of daily transactions on an large scale, usually comparing the blockchain with centralized global payment networks, such as Visa or Mastercard.

The challenges of scalability

Saifedean Ammous points out in his book The Bitcoin Standard, that distributed networks (where all nodes have an accounting record of all transactions) require that each of these nodes have sufficient storage capacity and powerful computing power. Naturally this will grow at a higher rate as new participants join the network.

Therefore, a blockchain of a distributed and decentralized nature such as that of Bitcoin faces the challenge of scalability.

Parker Lewis, Head of Business Development at Unchained Capital, expertly explained in his 2019 article Bitcoin is Not Too Slow, Bitcoin's competition is not with a global payment processor like Visa.

Visa is neither an issuer of currency nor does it perform final settlements, as those are cleared and settled months later by central banks. Therefore, the comparison between the two is wrong.

Rather, the Bitcoin Network and bitcoin (BTC) with its 3 functions: issuer-of-coins, settlement layer, and payments rail, compete with fiat currencies and their issuers, such as the dollar and the respective FED.

Even when we do try to compare Bitcoin to Visa, data shows that the average Bitcoin transaction volume is almost 450 times higher than Visa’s average. 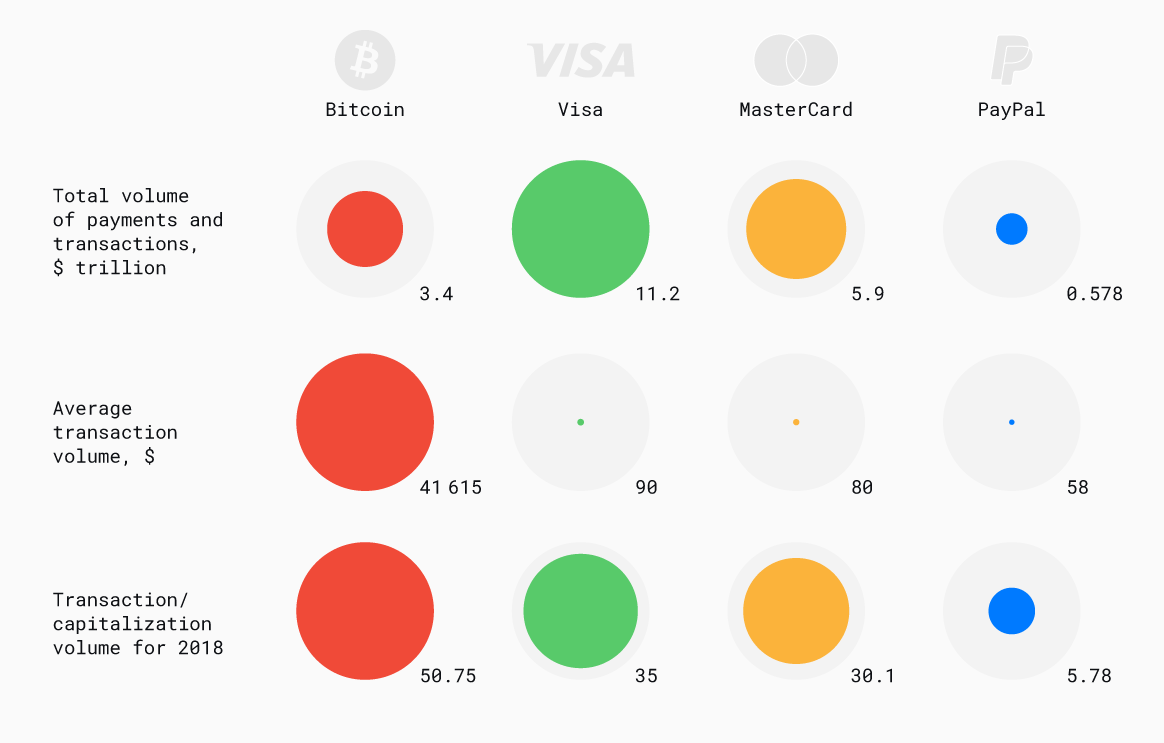 Using onchain analysis, Bitcoin is shown to be the preferred method of for transferring large amounts and international transfers

When correctly comparing Bitcoin's final settlement layer to that of the FED, as Lewis puts it, "bitcoin begins to look like a Ferrari". Operating on a 24/7, 365 days a year, no downtime, all permissionless, and transaction times of around 10 minutes, the Bitcoin Network really begins to outshine.

Where Bitcoin excels in 2 of its 3 main functions, issuance of currency and settlement layer, it lacks in payments rail.

Therefore, developers have proposed solutions to increase the scalability of Bitcoin that go hand in hand with the consensus rules of the base layer, avoiding any centralization of Bitcoin.

There are several options that have been put on the table regarding the challenge of Bitcoin scalability.

One of them was to increase the size of the Bitcoin blocks (which currently is limited to 1MB). However, this decision would reduce the number of nodes and its geographic dispersion, and therefore, would make the network more centralized.

This "big block" option was rejected by Bitcoin consensus, generating a hard fork of the network and giving birth to the project called Bitcoin Cash. Four years since Bitcoin Cash's birth, it has shown that this was clearly not the solution that Bitcoin needed to scale.

At around the same time as the failed Bitcoin Cash project, the authentic Bitcoin chain activated SegWit (Segregated Witness), to correct the problem of malleability. This upgrade paved the way for the Lightning Network, a second layer protocol designed to increase the scalability of Bitcoin, without jeopardizing the decentralization of the network. 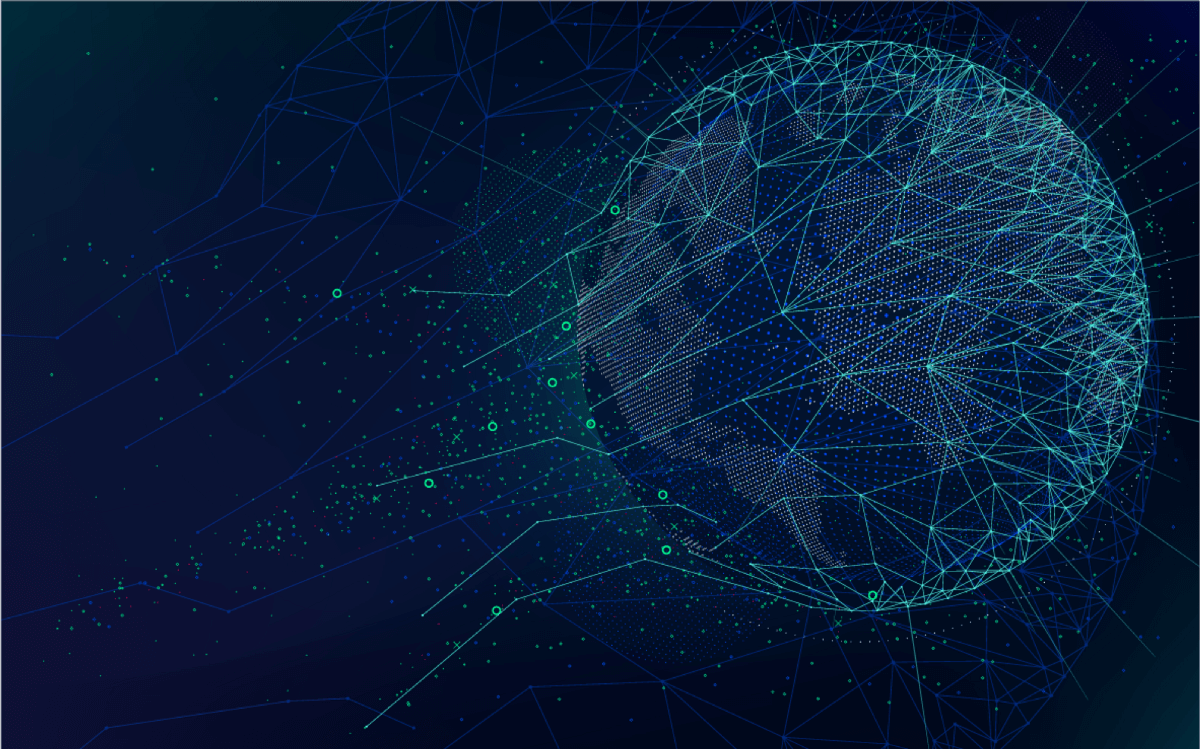 The idea of Lightning is that not all transactions need to be recorded on the blockchain.

In other words, this type of protocol is based on the fact that transactions as small as paying for a coffee or food do not need to be recorded forever on the blockchain.

What is the Lightning Network?

The Lightning Network (abbreviated as LN) is a second layer protocol developed on the Bitcoin blockchain. This protocol allows a greater volume of transactions between peers and without intermediaries.

It is a network of low-commission, instant micro-payment channels that take place outside of the Bitcoin blockchain (which is why it is known as an off-chain system).

The Lightning Network proposal was presented in 2016 by Joseph Poon and Thaddeus Dryja and its development is currently being driven by companies such as Lightning Labs, Blockstream, and ACINQ. 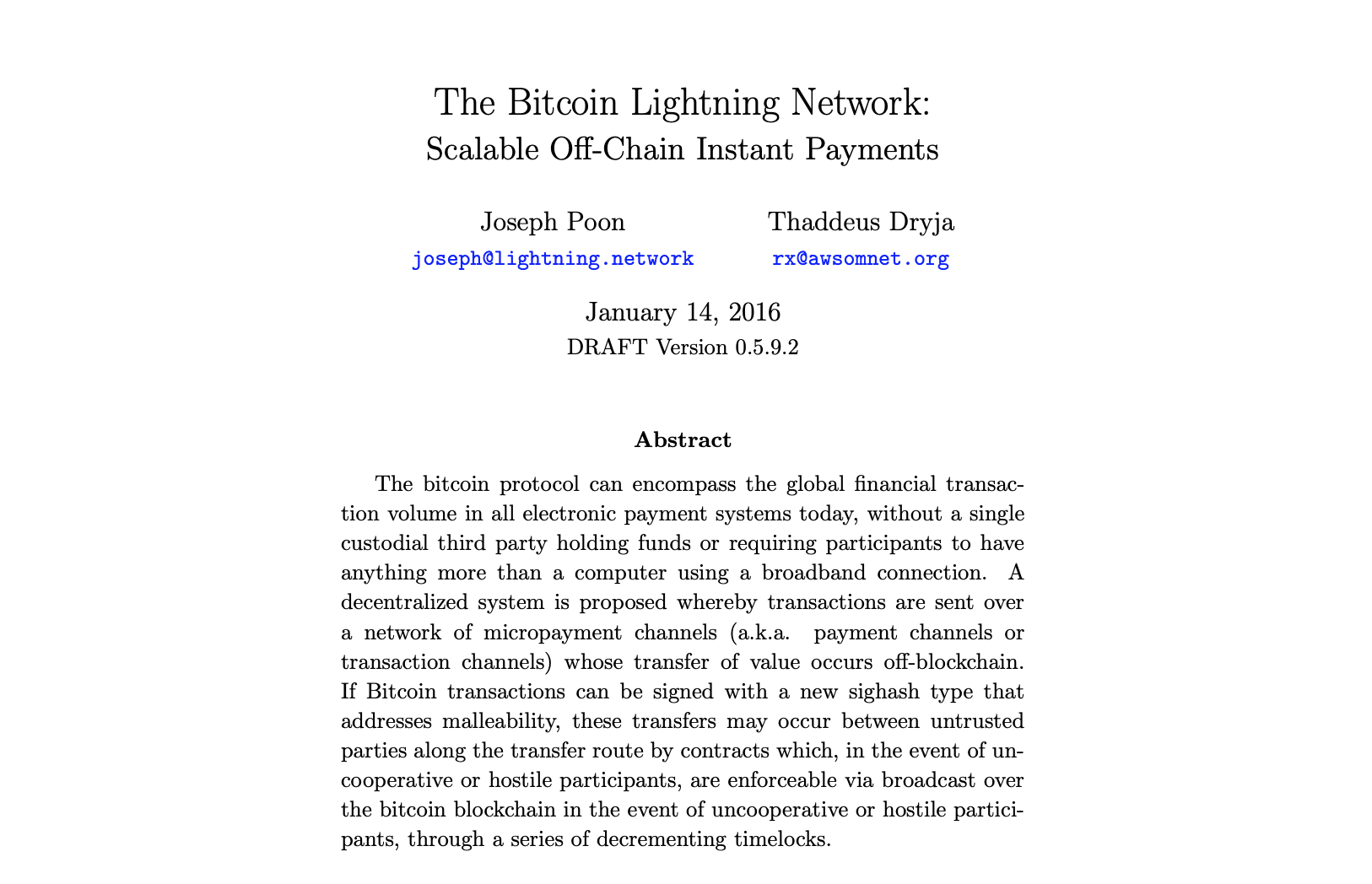 How the Lightning Network works

The Lightning Network builds a second layer on top of Bitcoin as a trust-minimized layer to scale transaction capacity. It works by opening payment channels between users that take transactions away from the Bitcoin blockchain.

When a payment channel is opened between two parties, they are able to endlessly exchange bitcoins without informing the blockchain about their activities.

This immensely increases the transaction throughput and speed of the Bitcoin Network because all transactions do not have to be approved by all nodes on the blockchain. 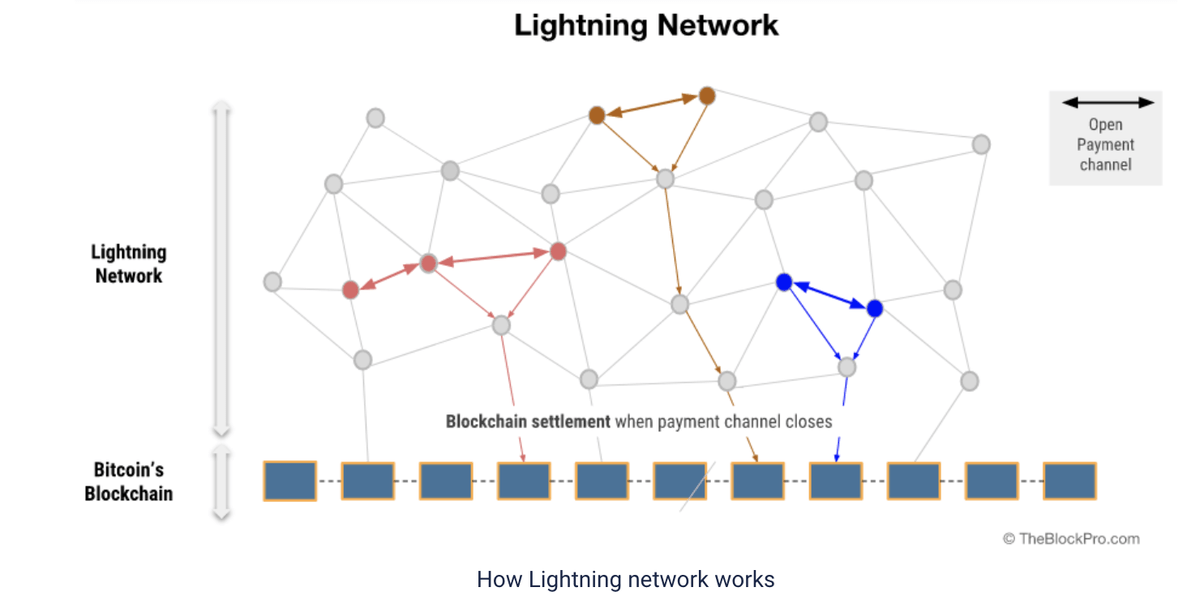 Although still under development, the Lightning Network is currently showing that it can solve the challenge of Bitcoin scalability without compromising the decentralization of the network.

Is the Lightning Network safe?

In 2019, the Lightning Network was subjected to its first security test by researchers Aggelos Kiayias and Orfeas Litos from the University of Edinburgh. Litos told Coindesk the following:

It should be noted that the Kiayias and Lits evaluation was not performed on the Lightning Network's software implementations, but on the code model. This means that their research did not rule out any probable bugs in the software.

Similarly, the Lightning Network website notes that the protocol is "enforced by blockchain smart-contracts without creating an on-blockchain transaction for individual payments". This statement coincides with what Kiayias and Litos pointed out; the Lightning Network's security goes hand in hand with Bitcoin.

However, as a young project, bugs have been detected in different versions of LN software. These vulnerabilities include those that put user funds at risk or exposed private information.

It is important to note that the Lightning Network is still under development. In fact its most recent version is still in beta, lnd 0.13, which was launched in mid-June of this year.

Lightning Labs explains that this most recent release includes a variety of enhancements to increase security.

The Lightning Network provides greater privacy to BTC transactions on the blockchain, which is much more vulnerable to transaction tracking.

Through LN's payment channels, users can conduct record-free transfers on the main Bitcoin chain, as long as the channels remain open. 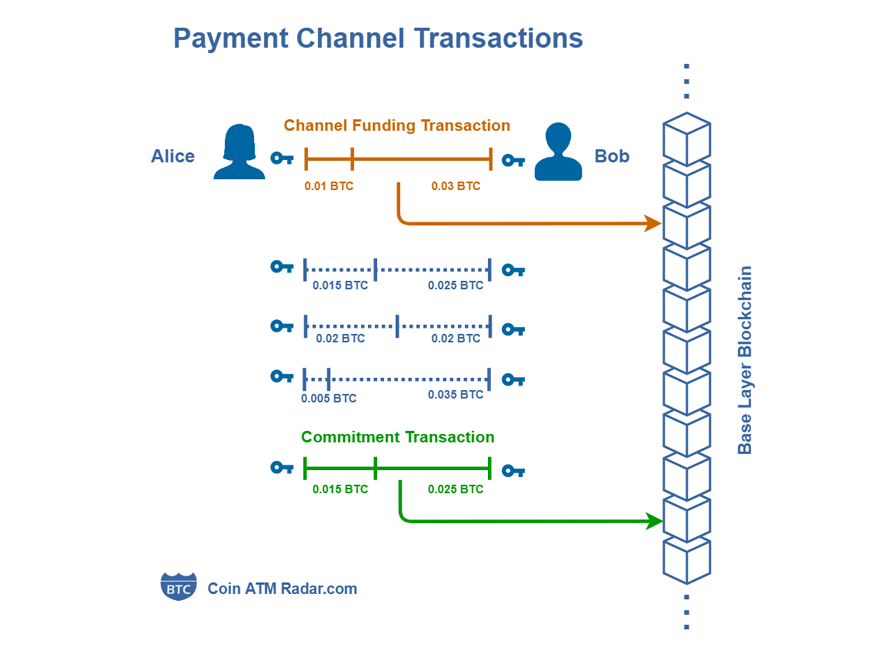 One concern is that LN payment channels and their nodes are required to be open and online all the time in order to receive and send transactions. This is something that on-chain Bitcoin does not require.

Other concerns are opening and closing channel costs, routing fees, offline transaction risk, node susceptibility due to having to be online at all times, congested payment channels.

LN is a decentralized system, in which anyone can participate as a node on the network. Running a Lightning node is very similar to running a Bitcoin node.

According to the ACINQ LN explorer, LN has 58,302 payment channels and 12,074 nodes currently around the world. 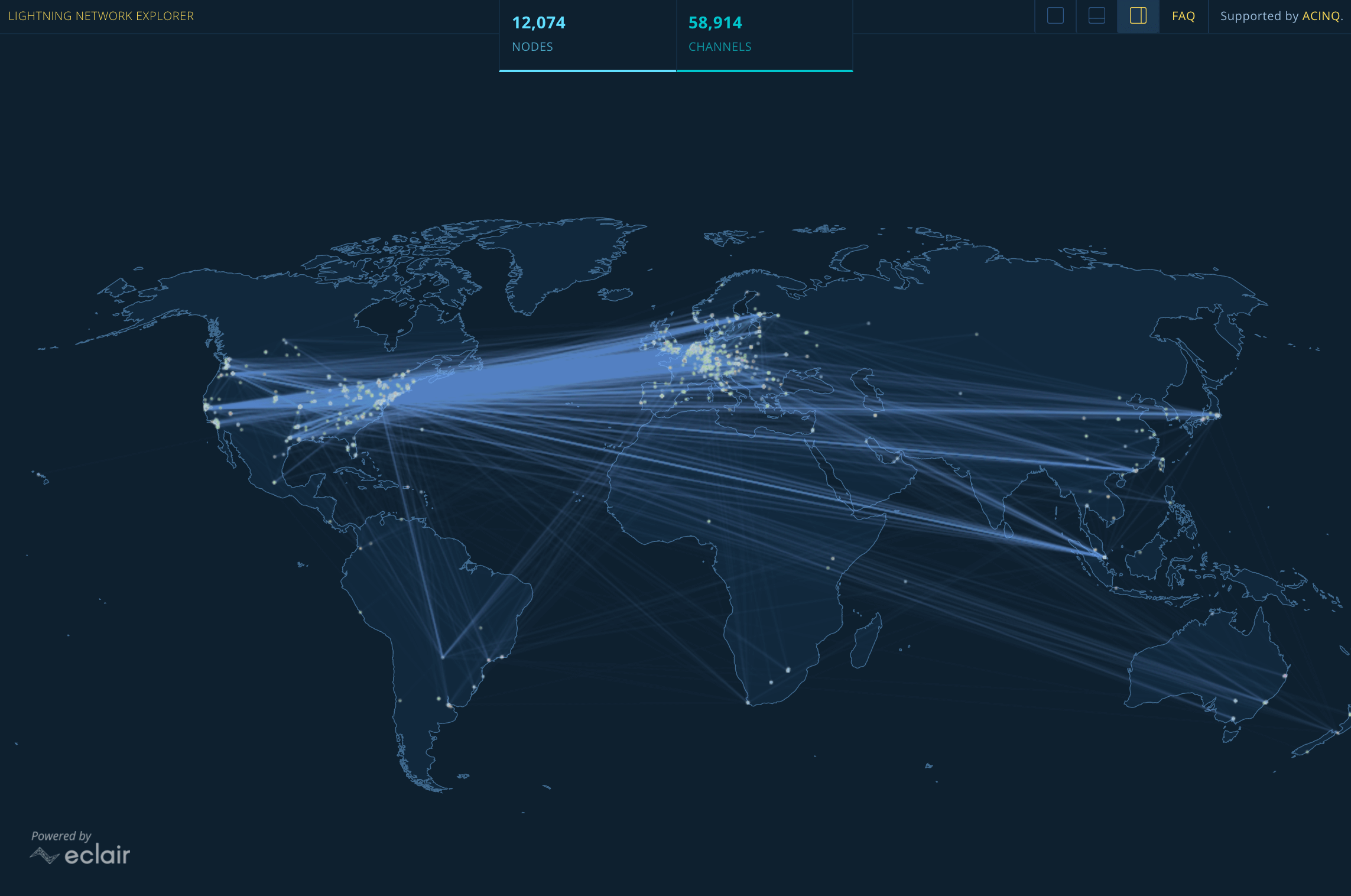 At present, there are several clients of the LN software: Eclair, developed by the French company ACINQ.

Others include: Lightning Network Daemon (lnd). Neutrino by Lightning Labs. c-lightning from Blockstream. Lit, developed by one of the creators of the LN protocol, Thaddeus Dryja, together with Alin Dragos.

In addition, a variety of options are also available that offer friendly interfaces and simple setup.

Phoenix, Breez and Muun. These three are available for both iOS and Android. Another important addition to this list is Zap, a wallet that is also available for computers with operating systems Windows, Linux and macOS.

Another option is Bitcoin Lightning Wallet or BLW (only for Android devices).

In this category we have Wallet of Satoshi and BlueWallet, both of which are available for iOS and Android devices. BlueWallet is also available on desktop. 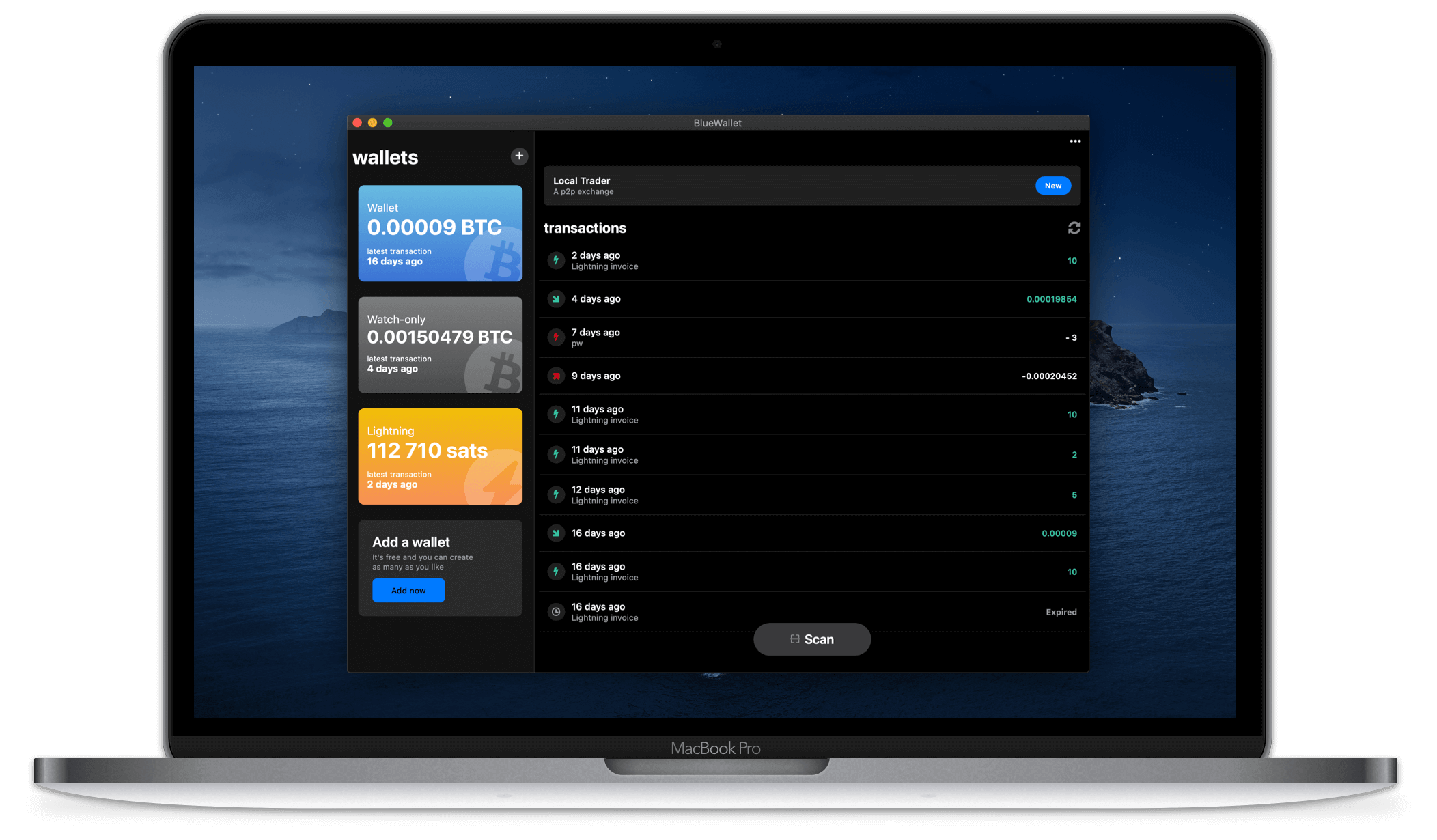 Likewise, there are LN wallet options on the market for web browsers, such is the case of Tippin.me, an extension available for Firefox and Google Chrome, which promotes the adoption of Bitcoin and Lightning through rewards in satoshis, which can be sent as tips to Twitter users.

As a way to promote the use of Bitcoin and Lightning through entertainment, video games have also been created in which it is possible to receive satoshis as rewards.

Such is the case with games like Bitcoin Bounce and Turbo 84. Sarutobi LN and Lightning Crush are among others.

Bitcoin Bounce, a game that rewards you bitcoin

Through LN, users can make daily micro-payments of BTC, from as little as 1 satoshi. In this way, LN has become the global payments platform for bitcoin, without abandoning the principles of Bitcoin.

With the advent of new technologies and the continued development on Bitcoin: Segwit, Schnorr signatures, MAST, Bulletproofs, Confidential Transactions, Sidechains, Lightning Network, and more that hasn't currently been thought of yet, it's hard to see Bitcoin not fulfilling, even excelling, all 3 of its core functions.

Emily Faria is a civil engineer with a master's degree in Environmental Engineering. She has worked as a writer and editor for content related to Bitcoin and cryptocurrency since 2017. Emily is Venezuelan and believes that Bitcoin is the best alternative to fiat money.