Why is Bitcoin Going Up 📈

Bitcoin’s price is influenced by a seemingly endless array of macroeconomic events, news stories, market participants, protocol upgrades, and investor sentiments. So, why is Bitcoin price up today on August 14, 2022? 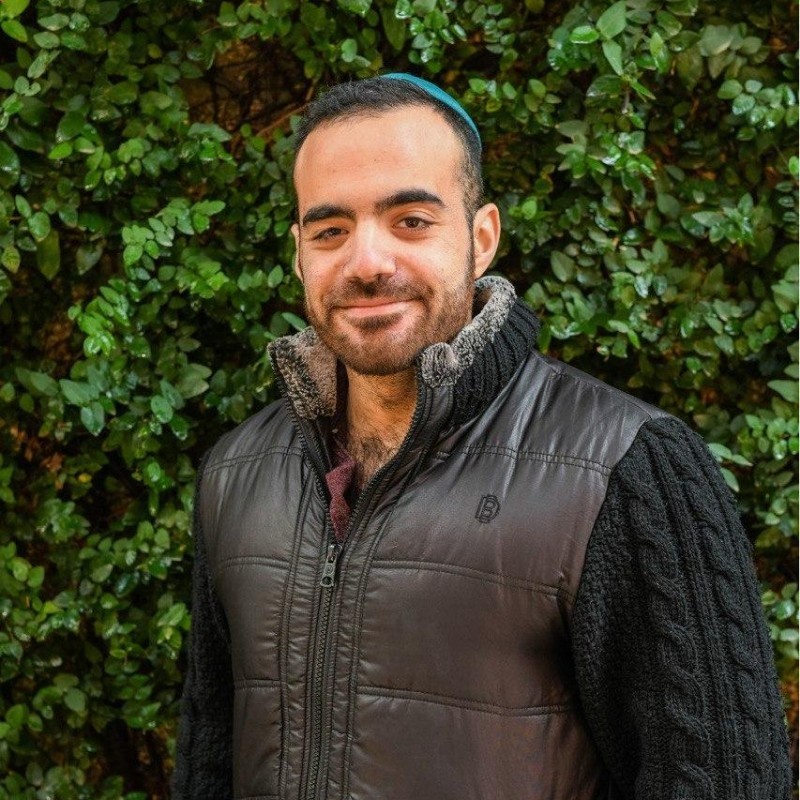 A butterfly flaps its wings in Japan, which sets off a hurricane in the East Coast of America.

Chaos theory is a scientific discipline that tries to parse out an underlying, deterministic set of laws that govern the behaviour of complex systems.

The Butterfly Effect serves as a textbook example of how a small change in the initial conditions of a system can lead to significant differences downstream.

Financial markets, and especially Bitcoin markets, are another example of highly chaotic systems where the ‘Butterfly Effect’ comes into play.

Yet we can, upon closer inspection, separate the signal from the noise and attach some method to the madness.

With Bitcoin up multiples since the start of the year, a return that beats out every other asset class performance, here are the primary drivers pushing BTC higher.

When the COVID crisis began, financial policymakers came to a quick realization that they would have to take unprecedented measures to prevent an impending recession, or worse, a total depression. The Federal Reserve and other central banks are no strangers intervening to save shaky economies.

Last time they did so was in the wake of the Great Recession of 2008.

Back then, the Federal Reserve launched a new scheme called ‘Quantitative Easing’ with the aim of injecting much-needed liquidity into a failing market.

In order to pump more money into the system, the Fed began buying up US Treasury bonds. This gave sellers access to more liquidity that they could then lend or invest in a bid to kickstart economic growth.

This went on for around 6 years, during which the number of assets held by the Fed quadrupled.

The Federal Reserve injected $3.9 trillion dollars via three rounds of asset buying that started in November 2008 and continued until October 2014.

However, the QE policies launched in the wake of the COVID crises are more significant in both scale and scope when compared to the previous rounds. Dubbed by some as ‘QE4ever’, the latest round of quantitative easing differs from its predecessors in two important ways:

During previous rounds of QE, a limit was set on the amount of assets the Fed was willing to purchase.

Not so this time around. As part of the ‘aggressive action’ taken to combat the COVID crisis, the Fed has committed to purchase as many assets as needed in order to keep the economy afloat. 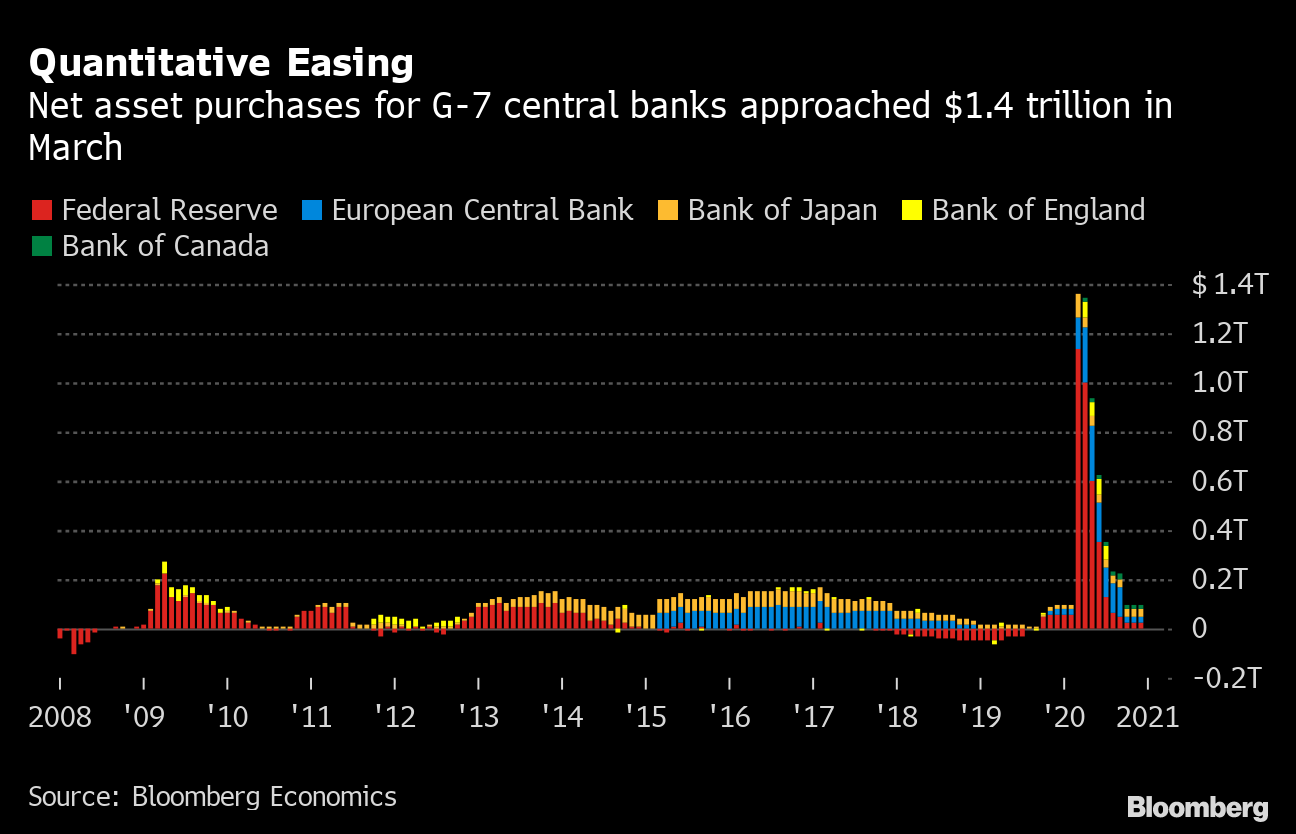 The Fed has led the charge, offering to buy unlimited amounts of U.S. government bonds and mortgage-backed securities

Not Sticking to Treasury Bonds this Time

After the 2008 crisis, the Fed focused its asset-buying in the safest market around - that of Treasury bonds. Realizing that this move would not suffice this time around, the Fed has initiated a program to buy up a whole lot of riskier assets such as junk bonds.

With fiat currencies losing not only their scarcity but their illusion of scarcity, many investors are seeking to park their wealth in inflation-resistant asset classes.

Bitcoin is like a one-way sponge soaking up all the excess liquidity injected into the system, and preserving it in a provably scarce environment.

Boosted by its unrivaled money printing powers, the US continues to enjoy a strong dollar and a remarkable stock market recovery. Meanwhile, emerging markets aren’t as privileged.

After World War Two, victorious Allied powers convened at Bretton Woods to architect a US-based financial system. They pegged every currency to the dollar, which in turn became redeemable for gold held by the US.

Thus began the era of the US dollar as the preferred instrument of international trade and a global reserve currency.

50 years ago have passed, and the US dollar is still the central transmission channel for global trade. Demand for the greenback from economies worldwide has never been more robust.

International borrowers and investors conduct business in US dollars instead of taking on the risk of local fiat currencies. In fact, the amount of dollar-denominated bonds outside of the US has doubled from $30 to $60 trillion between 2008 and 2019.

A stronger dollar increases the cost of debt for international dollar borrowers, leading to a jump in borrowing costs and steep foreign exchange losses.

For citizens of such economies, Bitcoin offers refuge from the weakening purchasing power of their local currency, as well as a hedge against the full-blown hyperinflation experienced by Zimbabwe and Venezuela.

What a difference three years makes. In the heat of its last rally in mid-2017, leading figures in finance increased the volumes of their attacks on Bitcoin.

Chief amongst the detractors was JP Morgan CEO Jamie Dimon, who hit out at Bitcoin for being ‘worse than the tulip bulbs.’

Dimon joined a chorus of Wall Street veterans in comparing Bitcoin to the first recorded speculative bubble - the tulip trade in the 17th century.

Today, JP Morgan is sounding an entirely different tune with regards to Bitcoin. Not only has the bank declared that Bitcoin has staying power as a result of having survived its first true test, they are backing it up with action.

When it comes to Bitcoin, JP Morgan is now accepting exchanges as clients, starting with Coinbase and Gemini.

Paul Tudor Jones is another notable investor that has begun to allocate capital to Bitcoin. While antagonism toward Bitcoin still exists in Wall Street circles, it's definitely trending more towards acceptance and adoption.

A pandemic coupled with worldwide social unrest has turned our world upside down. Many are questioning the institutions and power structures that they once took for granted.

Centralized authorities, be it in media, government or financial institutions, no longer have the invincible aurora they once held. Citizens are seeking alternatives that are more aligned with their value systems.

It is against this backdrop Bitcoin’s unique proposition is best understood.

Bitcoin represents a fundamental departure from the current debt-driven monetary system that is responsible for the dramatic inequality in our world today. It could form the foundation of a more inclusive, more transparent global order.

Bitcoin miners are responsible for grouping new transactions into blocks and adding them to the blockchain.

Miners secure the network, and their economic considerations are thus foundational to Bitcoin. Explaining a few terms is key to understanding these economics and how they adjust to prevailing market conditions. 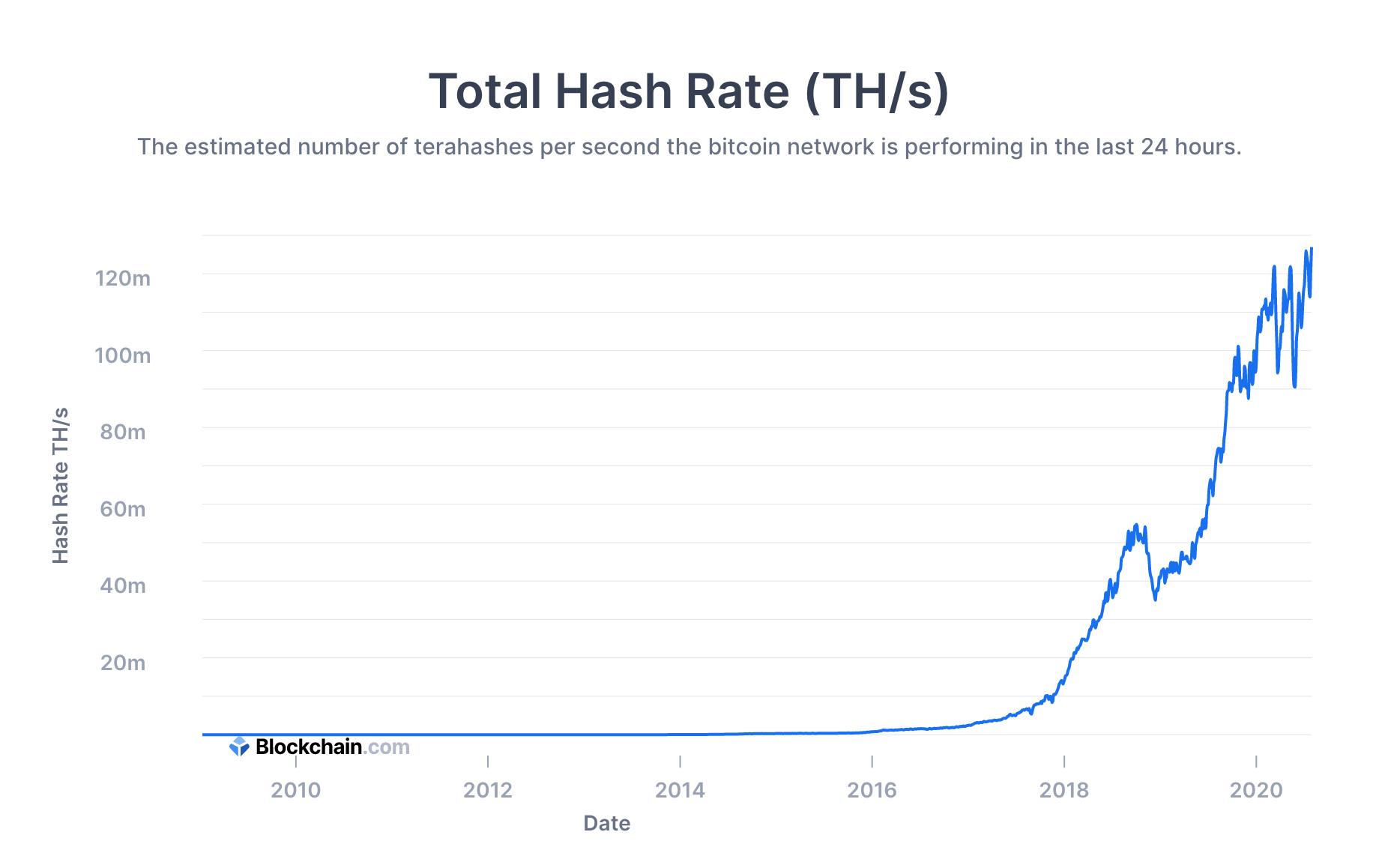 One of the primary concerns that are raised every time Bitcoin’s price decline is that of a miner death spiral.

This scenario envisions that miners could sell their Bitcoin and shut off their hardware to cut losses during downturns. Miners exiting the network would then cause the hashrate to drop, harming the security of Bitcoin and causing the price to drop further. 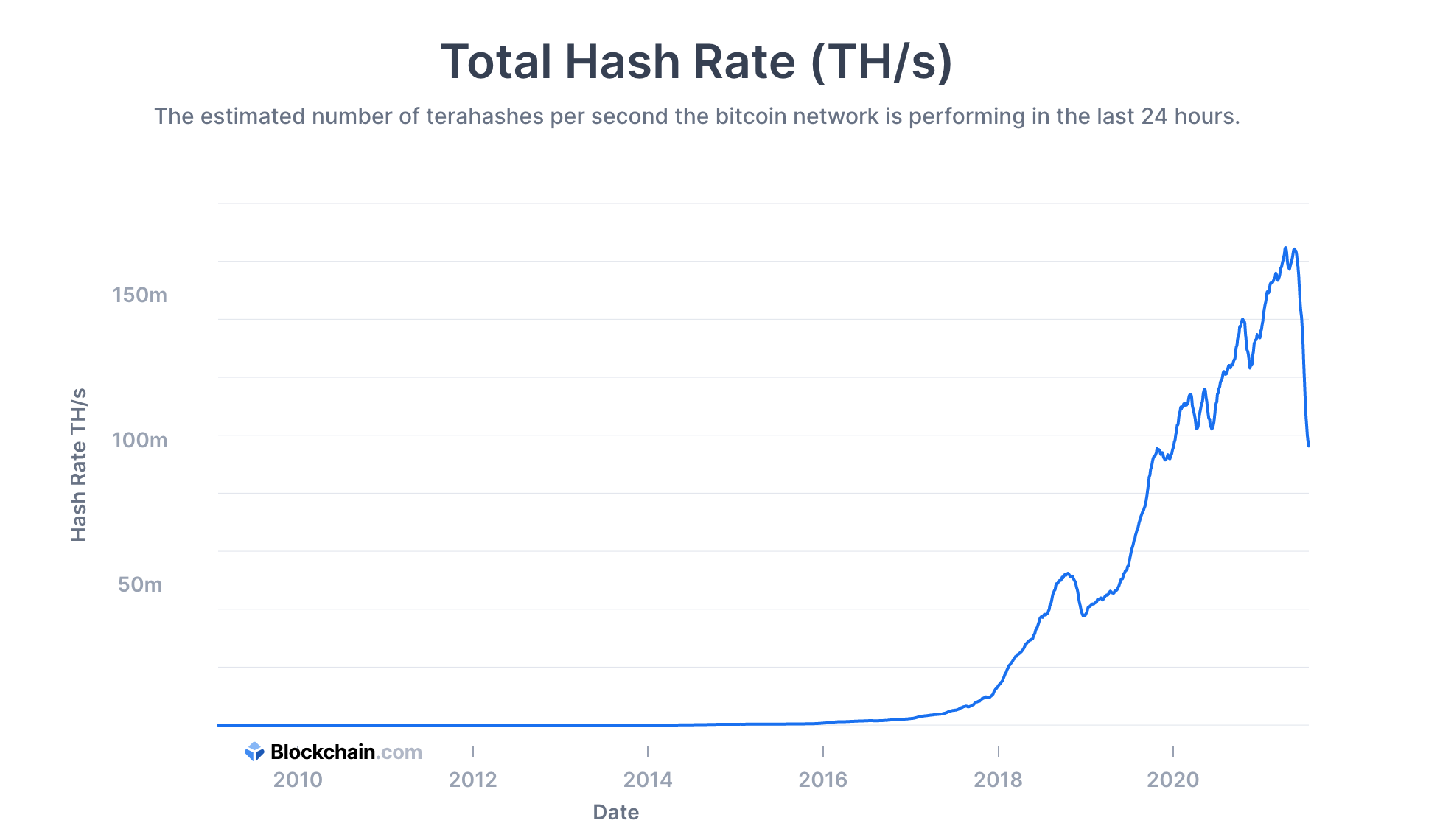 Bitcoin experienced a massive 50% drop in hashrate in 2021 due to the China mining ban. One of the largest in Bitcoin history.

This scenario actually came to fruition in June 2021 when China decided to crackdown on Bitcoin mining.

As mining operation began shutting down in regions like Xinjiang and Sichuan, the Bitcoin network experienced a hashrate drop from 108 EH/s to 69EH/s, a decline of almost 35%.

This sudden hashrate drop might look alarming to some but actually presented miners from around the world a unique opportunity.

With mining in China declining, there are fewer miners. The fewer miners online, the easier mining bitcoin becomes.

It’s important to note that, more than a decade since the first Bitcoin was mined, a death spiral has still not happened. Part of this is due to Bitcoin’s inherent self-correcting mechanism known as a difficulty adjustment.

Bitcoin's "network difficulty," which measures how much computing power is needed to mint a new bitcoin

Every 2,016 blocks, or around 2 weeks, the puzzle difficulty is adjusted to ensure that new blocks are produced once every 10 minutes. When a drop in price causes some miners to exit the network, the remaining miners will have an easier time producing blocks and earning rewards.

Cutting costs in such a way raises the profit margin for the remaining miners, encouraging more miners to get involved.

Conversely, when the number of miners gets too high, the difficulty adjustment makes it harder to produce blocks, forcing out the less efficient miner.

Bitcoin's mining economics are constantly adjusting in order to make sure that the network is producing a new block every 10 minutes. Inefficient miners struggle to stay afloat, which pushes Bitcoin mining in the direction of efficiency and cheap electricity.