There is only one way out of hyperinflation, and that way is through hyperbitcoinization and continued ignorance of Bitcoin is proving to be expensive. 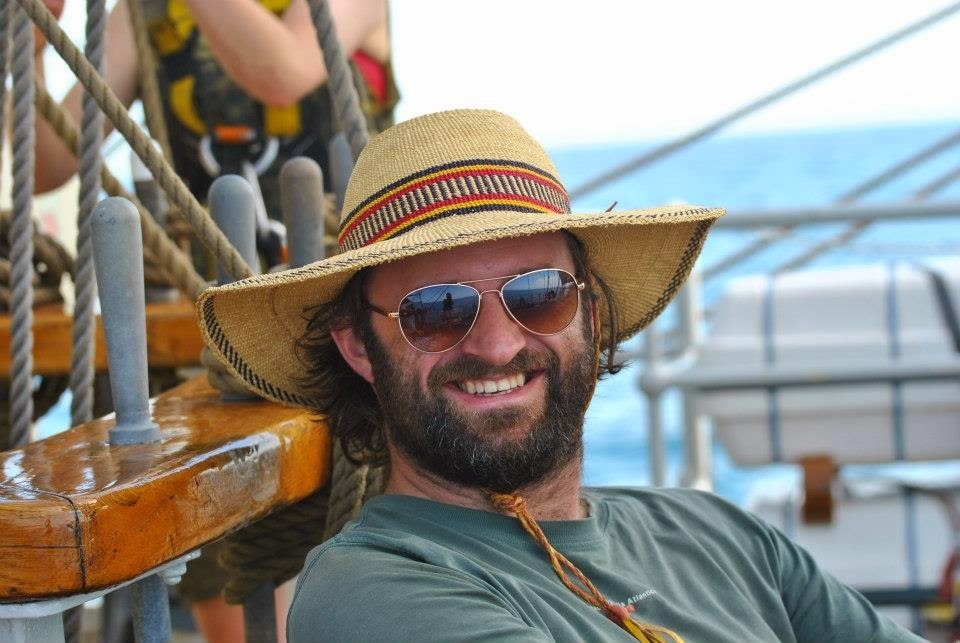 Every now and then I see the phrase “I can’t believe this app is free!” on Twitter.

Every time I do, it makes me a little uneasy. Is Twitter free? Is any social network free? I know that I’m the product and not the customer to some extent, but what does “free” actually mean in 2021?

To find out, we have to do what we always have to do. We have to dig a little deeper.

In the early years of my Bitcoin journey, I used to recommend a certain Bitcoin wallet. It was slick, clean, and had “Be your own bank” as its catchphrase.

Today, I wouldn’t recommend it to my worst enemy. It has taken a shitcoin path, and it is terrible at the moment. It all began when the company tried to make their users give up personal information.

The app would give you some shitcoin for “free” if you did. Note that they didn’t give away free bitcoins. No one does these days. On the contrary, more and more people wouldn’t sell their bitcoins at any price.

What properties must a token that a company can give away for free have? You can almost always suspect that there’s a hidden agenda behind free stuff. In the case of most shitcoins, that agenda is quite easy to see. 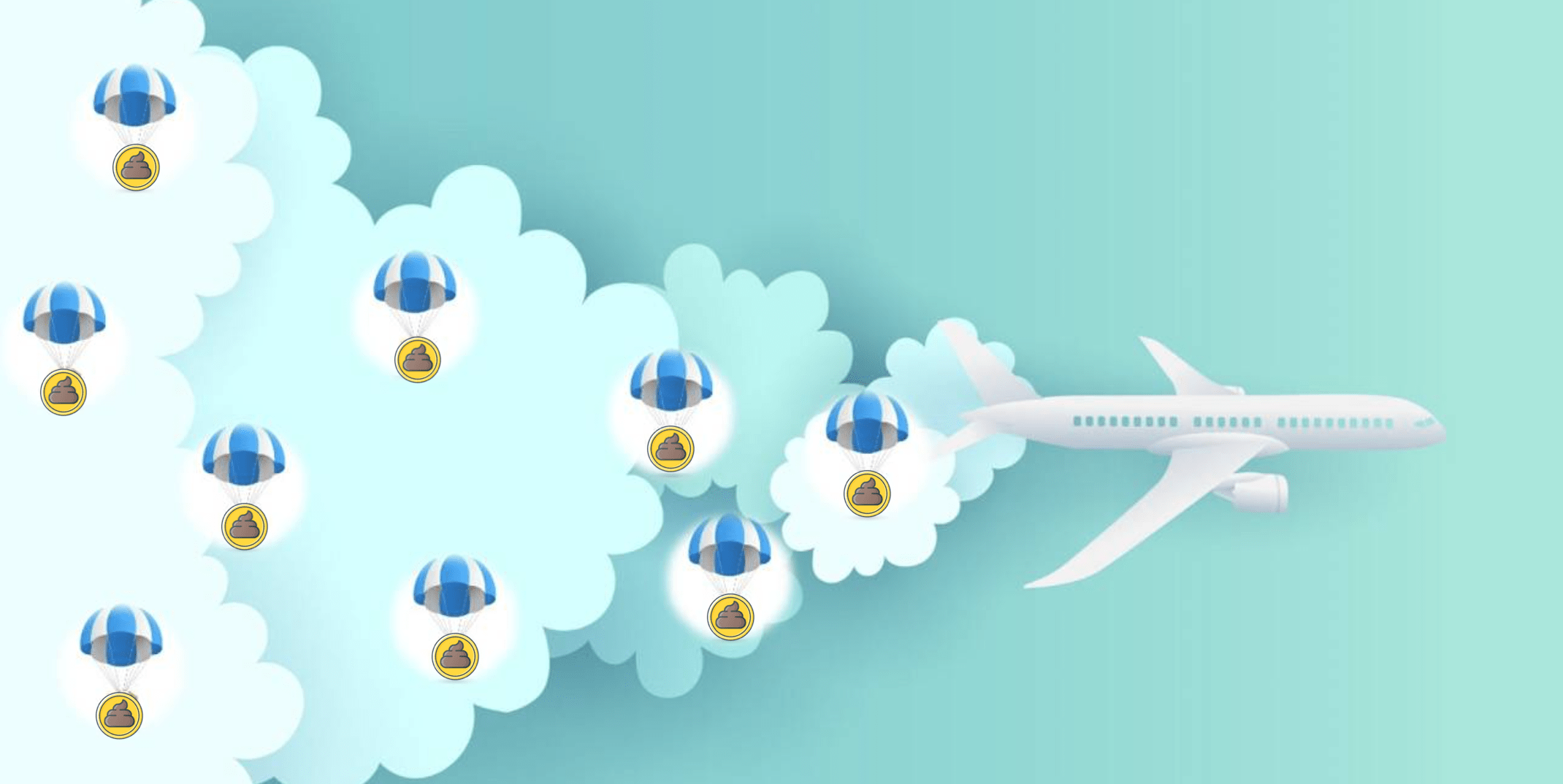 There's no decentralization and there's almost always a premine involved. The token is then given away for free for marketing purposes. The early holders only need the price to go up a tiny bit in order for their bags to become very valuable.

This is how all pyramid schemes work. It’s nothing new. When it comes to free services on the internet though, things get a little more tricky. The attention economy makes us give up our time for a service.

We’re nudged into clicking on ads and suspicious links by the free service’s platform. The more information we feed the algorithms with, the easier it becomes for them to manipulate us.

An A.I. figures out connections between our past and future behavior that we don’t even know ourselves. The process gets more effective by the second and we have no chance of keeping up. But is this phenomenon limited to social media and gaming? Far from it.

Have you noticed the housefly painted onto the ceramic of the urinals at the airport? They’re an example of a very productive way of nudging people into better behaviors. 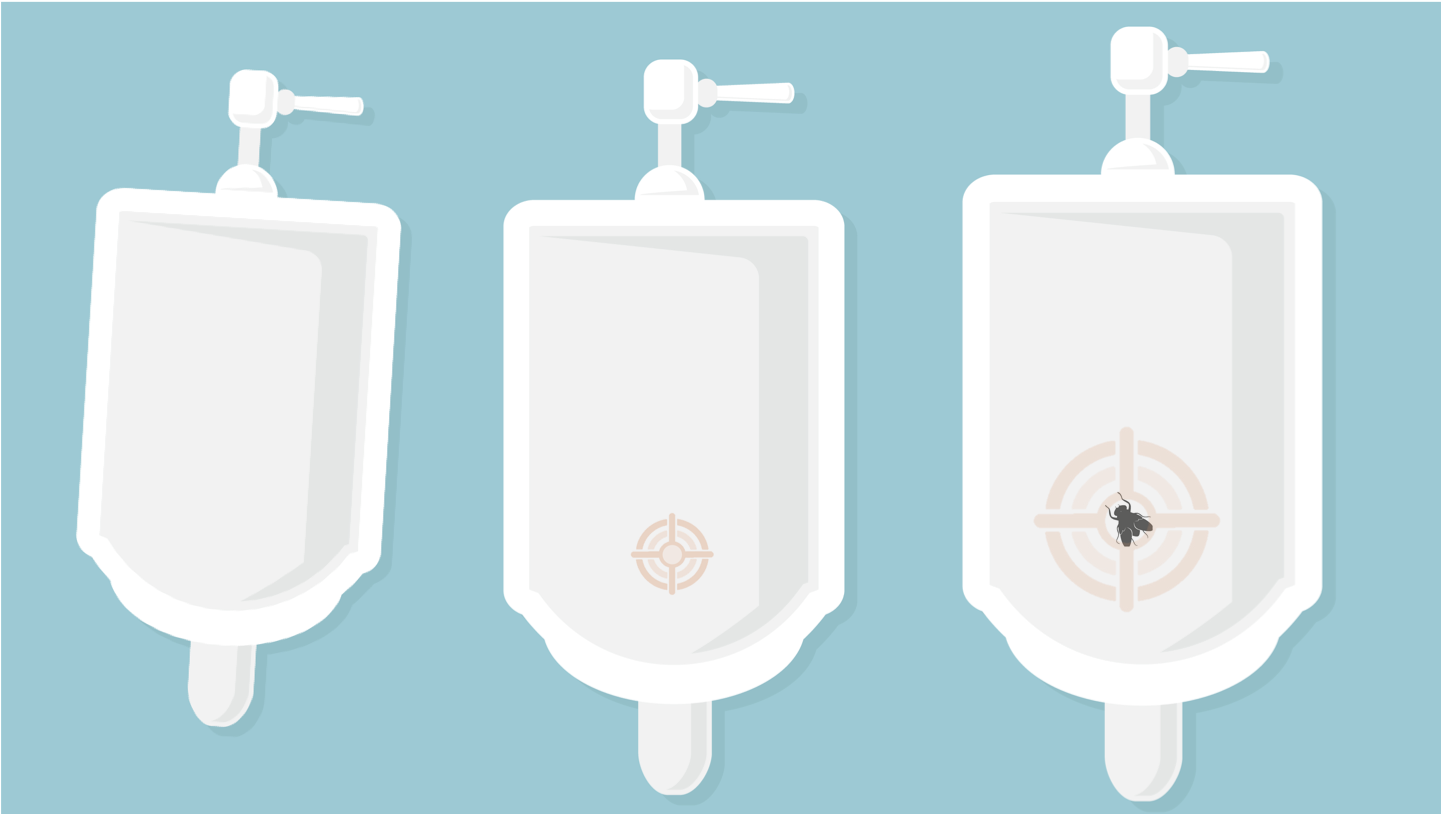 Images of flies etched in the porcelain near the urinal drains resulted in a 80% drop of “spillage” on the men’s-room floor in an experiment in human behavior by Schiphol airport in Amsterdam, 1999.

The urinal user gets a target to aim at for free. This reduces spillage and cuts the cleaning cost of the toilets of the airport. Nowadays, these little flies are everywhere because they’re so effective. They come at no cost and they alter the behavior of the toilet guests for the better.

So what’s the problem? Well, the problem is that our money has become the housefly in the bottom of the urinal. The “nudging economy” is everywhere but its latest iteration is a bit scary, to say the least.

If it’s free, it’s not money

Since the start of 2020, the M2 money supply of US dollars has gone up by around 20%. Sooner or later, this will affect your purchasing power. 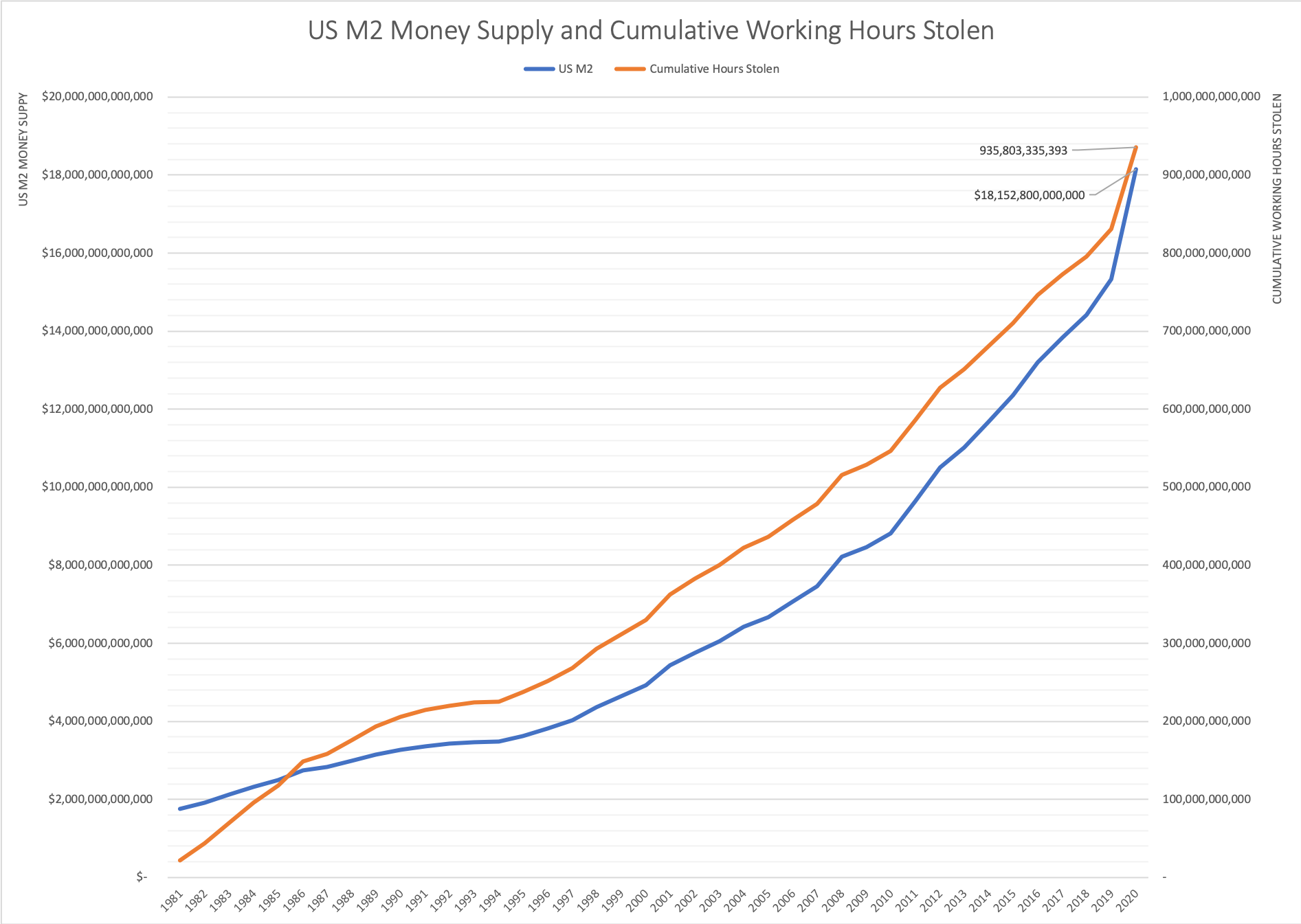 By dividing the growth in USD supply by the average hourly wage each year in dollars, we calculate a proxy for the hours stolen from society through US M2 supply expansion - Robert Breedlove

Also in 2020, all US citizens received “free” stimulus checks on several occasions.

It seems most likely that this will continue to happen in 2021. The short-term gain of $1200 for “free” is nothing compared to the long-term damage of the increased money supply.

Like a school of fish, most people take the bait and swallow it whole. In almost all countries, measures have been taken to lessen the impact of the virus. But almost all these measures have increased people’s dependency on the state.

The IMF keeps talking about a great reset, and there’s no way to stop the money printers. The system is unstable by design, but we’re led to believe that it’s not. The stimulus checks are a housefly in the bottom of a urinal that will drown people in their own urine.

Beware of anything advertised as free. Especially if it comes from the government. There’s no such thing as a free lunch. They want to make you dependent on them for your survival.

If you are, you’re not very likely to vote against their will. The dollar is a shitcoin. So is the Euro, the Yuan, and everything else that isn’t Bitcoin. 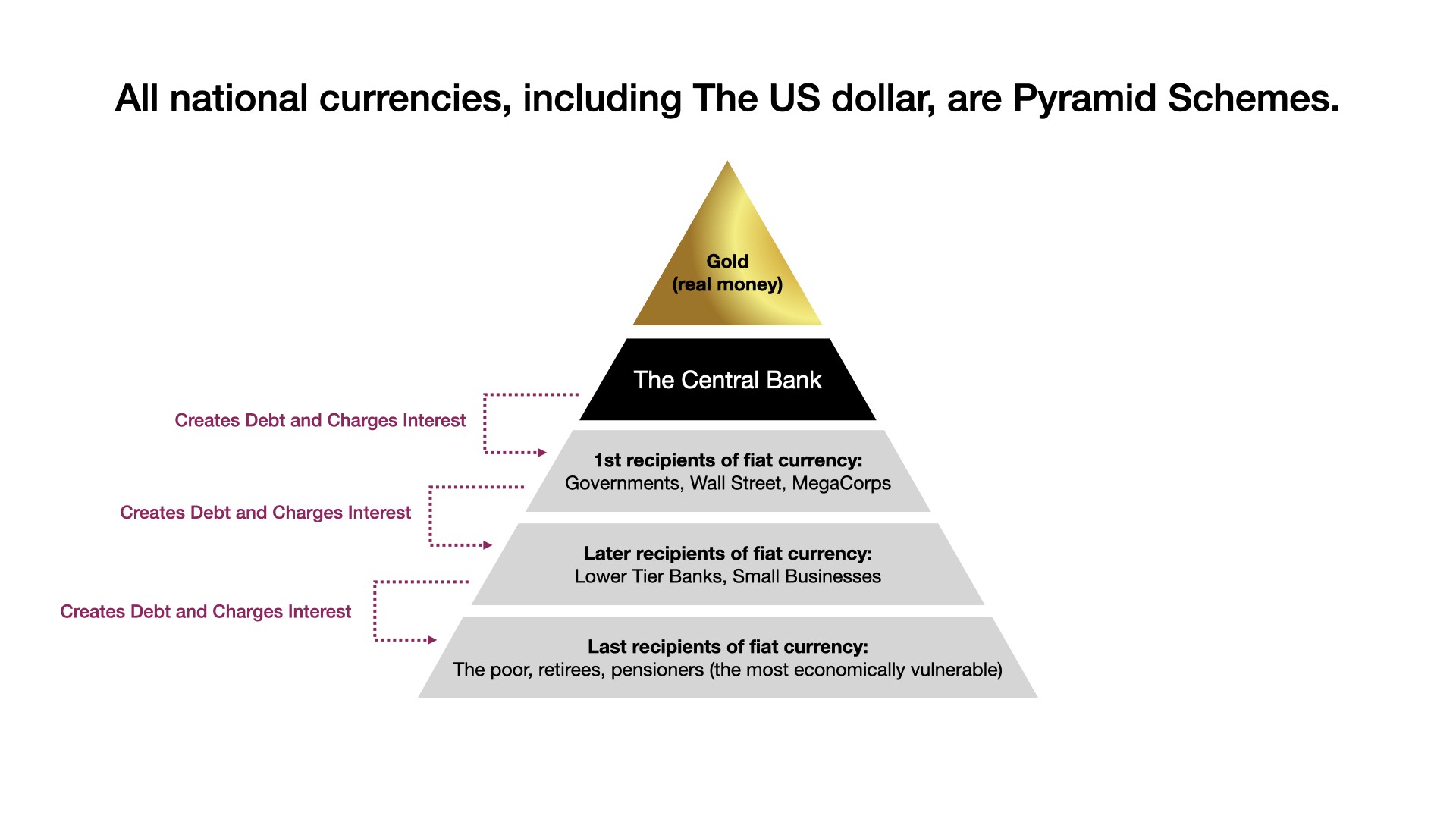 Every time a new unit of fiat currency is printed (euphemistically called “quantitative easing” or QE by central banks), new layers to the pyramid scheme are laid from the top down, and the inflationary costs are externalized onto those using fiat as a store of value - Robert Breedlove

If it’s free, it’s not money. It’s a tool for controlling you in some way or another. Your attention is valuable, your labor is valuable and your time is valuable.

Monetary inflation is mass time theft. It’s a bottomless void. The US dollar is still the world’s reserve currency. The world prices oil in US dollars per barrel. Whenever dollars are being brrr’d into being, products made from oil get more expensive.

When the purchasing power of the dollar drops, we all pay. You can't make plastics without oil, and plastics are everywhere. Planetary-scale mass time theft finances the American stimulus checks. We all pay, whether we’re aware of it or not. There’s no such thing as a free lunch. Nor is there something as a free government handout.

There's no free social media platform or a free shitcoin airdrop. They all come at a price, even though it can be hard to realize who’s paying for what.

We live in an era where Keynesian economic thinking is everywhere. Interventionism is the norm and no economy is sound. Not in the true sense of the word. It has been like this for quite some time and all the earth’s economies are skewed. 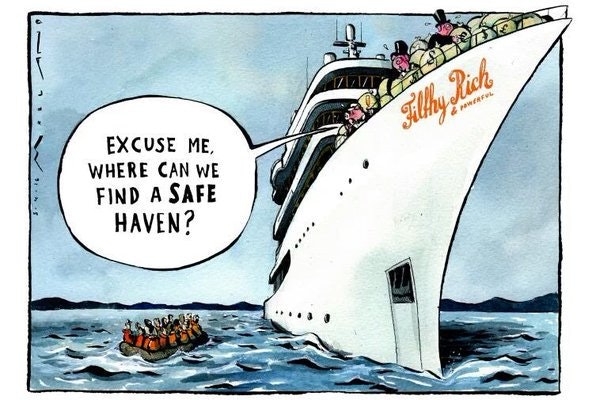 People complain about wealth gaps but still vote for policies that exclude them. Big finance plays by their own rulebook and it’s getting worse over time. Prices are kept artificially high even though production costs approach zero. Digital products have always been free to copy.

Still, software companies find ways to charge us for them. Either by subscription fees, ads, or by collecting data about us. The internet should have changed everything and in many ways it did. But the companies that run the show today still operate under broken rules. Rules of an outdated economic paradigm.

Technology is inherently deflationary. Every innovation saves humanity time. We produce more with less effort. Our money should reflect this.

Instead, a tiny elite forces us to give up a huge chunk of our time to pay for their excesses. It’s time to take matters into our own hands, and the tools we need are at our disposal already.

"Don't keep all of your eggs in the same basket!"

This is one of the most common pieces of financial advice you’ll hear throughout your life. This usually refers to diversifying your portfolio.

But what if you noticed that all but one basket were broken? That they were all leaking egg yolk through cracks and holes? Eggs are fragile, even golden ones. Bitcoin is not a golden goose. You still have to trade your time and effort for eggs. But Bitcoin can provide you with an ironclad, bullet-proof basket and coat your eggs with gold.

If the money you’re using gets devalued over time, it doesn’t matter how diversified your portfolio is. If your fuel tank is leaking you’ll need to refuel a lot more often. Don’t think that old clichés will do you any good when the money itself is broken.

Faith in mathematics and the belief that people will act in their own self-interest. A leap of reason would be a more accurate term. 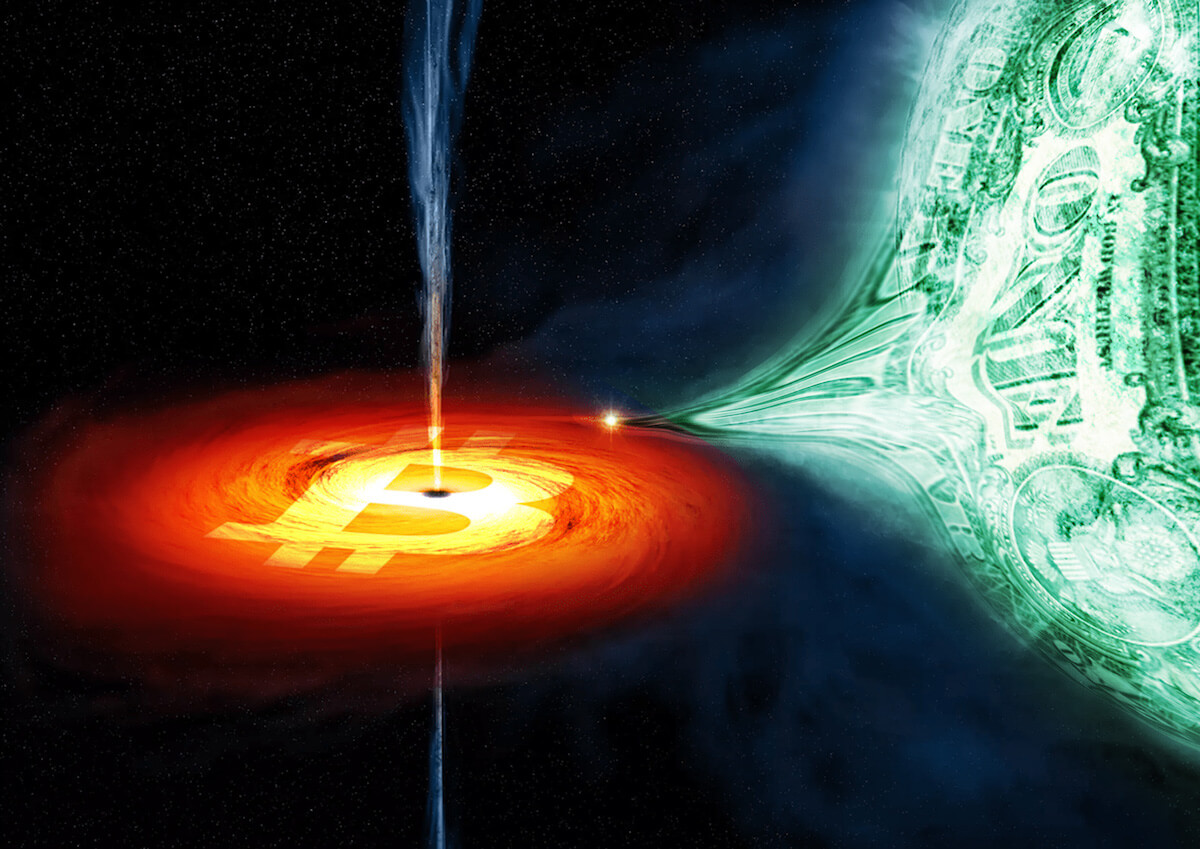 Bitcoin is anything but free. It’s hard to buy them without paying more than the market price at the time of buying. The network itself has an in-built fee system for prioritizing transactions. But there’s more to it than that. Exchanges have their own fees, so do Bitcoin ATMs.

Many services require you to give up some personal information. Bitcoin trades are taxable events in most countries. The list of extra costs goes on. Few realize that this is a good thing though. All the extra costs involved are a testament to the immense value of the network. Bitcoins are expensive to produce, expensive to store, and expensive to trade with. At least they can be if you’re not careful enough.

In other words, ignorance is expensive in Bitcoin. Bitcoin is the polar opposite of fiat currency in this regard. Fiat monetary systems reward ignorance. At least, that’s what the central banksters want you to believe.

In reality, ignorance is always expensive. If you’re not paying for a service, chances are that you’re the product. Not the client. Never forget this.

The government is a bit like an antivirus software program. You get supposed protection from viruses by giving up money and information. And you give it to the only people that have something to gain from spreading a virus.

As Benjamin Franklin said in 1775: “They who can give up essential liberty to obtain a little temporary safety, deserve neither liberty nor safety”.

Free money isn’t money. Nor is it free. The cheaper the money, the costlier the lives of its users. And vice versa.

Knut Svanholm writes about the philosophical impacts of Bitcoin and its' positive societal changes. His book "Bitcoin: Sovereignty Through Mathematics" is one of the highest rated Bitcoin books on Amazon.